A decade ago, Toyota introduced its Scion brand as a way to appeal to younger buyers seeking affordable, alternative forms of transportation. The idea was to fill Scion showrooms with special, limited-production models that had quirky personalities, offer them at reasonable non-negotiable prices, and provide ways for buyers to customize the cars through dealer-installed accessories. Toyota envisioned Scion as a way to capture Generation Y buyers when they bought their first new car, moving them up into a Toyota when they settled down and had a family, and then into a Lexus once they made it into the executive ranks at ABC Inc.

At first, Scion was a success, an automotive culture unto itself manifested in alternative music, sponsorship of social events, and in the unusual yet affordable vehicles themselves. Then, right around the same time that the Great Recession struck and the target audience decided it cared more about spending money on smartphones, tablets, and data plans than it did a new car, Toyota seemed to lose interest in the project. To eke out a profit, models remained in production longer than originally expected, and when the original vehicles were replaced the new redesigned cars were basically the same as the old cars, only more modern.

Today, 10 years after its debut, Scion is struggling. Aside from the buzz surrounding the debut of the FR-S sport coupe last year, Toyota isn’t giving its youth-oriented brand much love. In fact, it has told its dealers that they can bail on Scion with no penalty, if they want to.

Now, what’s the point of all this backstory? I happen to be a Scion fan. The cars have personality, something that cannot be said for many Toyota and Lexus models. The cars are affordable, representing genuine bargains even at sticker price. The cars are dependable, promising years of trouble-free service, a trait appealing to buyers of all ages. And, the cars can be upgraded with lots of Toyota Racing Development (TRD) goodies that make a genuine difference in terms of fun-to-drive factor.

The Scion xB was the vehicle that originally put Scion on the radar, an ugly little box of a car that, for mystifying reasons, inspired genuine passion in its owners. Last redesigned for the 2008 model year, the iconic Scion xB remains a staple of the lineup, despite advancing age and rumors of its imminent demise. In fact, after a protracted 2013 model-year production run, Scion has elected to continue the car for the 2014 model year.

Given the xB’s continued production, I decided to spend a week with one. My test car had an automatic transmission but no other options, which kept its sticker price to a reasonable $18,675. In light of the Scion xB’s utility, that’s a bargain, but it comes at a cost.

The Scion xB isn’t a good-looking car, but that doesn’t mean people can’t fall in love with it. What it lacks in terms of appealing design it makes up for with big personality.

Highlights include LED positioning lights tucked into what appear to be oversized brake cooling ducts, bulging projector beam headlights, a hood as flat as Nebraska, a windshield as vertical as the Empire State Building, bulging oversized wheel arches, and around back, a racy-looking diffuser panel. The defining characteristic, though, is the xB’s floating roof design. Thanks to black painted windshield pillars and window surrounds, combined with thick, windowless rear pillars, the roof appears to jut forward from the rear of the car like a giant baseball cap visor.

Plastic wheel covers are standard, in one of three designs. My test car had the 7-spoke covers mounted to 16-inch steel wheels. Scion dealers can install aluminum wheels in 16-inch, 17-inch, and 19-inch sizes, as well as Toyota Racing Development suspension upgrades.

Inside, the Scion xB is far more conventional in appearance and layout, except for the strip of gauges arrayed at the base of the windshield, and slightly off-center just to make sure the cabin remains quirky. Materials, for the most part, are inexpensive in terms of look and feel, but whaddaya expect at this price point?

Slip behind the Scion xB’s steering wheel, and the car’s low starting price is plainly evident. It would appear that an owner could hose this vehicle out and do no damage. But don’t actually try that at home.

I don’t find the driver’s seat comfortable. It can be raised higher for a better view out, but because it lacks a separate seat cushion angle adjustment, I felt like I could choose to sit close to the floor with good thigh support, or sit high enough to see out but with no thigh support. It wouldn’t cost very much money to rectify this, and I think most buyers would be willing to pay extra for a solution.

Additionally, there’s not enough seat track travel for the driver’s seat, the pedals are too close for comfort, and the upper door panels are covered in hard plastic, making them a very uncomfortable place to crook an elbow while driving. At least the center console armrest slides forward in an effort to make the car more tolerable.

The xB’s back seat is quite roomy, and it sits up high for impressive thigh support and a good view out. Plus, the front seatbacks are softly padded, making them kind to knees should the two meet. What’s missing back there, especially given the target buyer for this vehicle, are cupholders sized to hold monstrous energy drinks and USB ports for connecting mobile devices.

Pop the Scion xB’s hatch, and there’s 11.9 cu.-ft. of cargo space behind the rear seat, though I suspect that the car’s official number isn’t measured to the roof. I say that because Scion claims that the xB holds 69.9 cu.-ft. of your stuff if you flop the rear seats down. That’s more than many crossover suvs, and represents an enormous leap from the standard trunk measurement.

If you’re drawn to the Scion xB for it’s wacky exterior design, you might be disappointed by the interior. The gauges are mounted up near the base of the windshield, and slightly off-center to continue the quirky design themes established by the exterior. Otherwise, the xB’s interior features conventional controls in logical locations. Not only that, many of the bits and pieces are yanked out of Toyota’s communal parts bin, which helps keep the xB’s price tag low but doesn’t do much for making the xB special.

Unfortunately, Scion provided a 2013 xB test car, and one built before August of 2013 when the company replaced the old-school stereo with a new 6.1-inch touchscreen Display Audio infotainment system. Based on my experience with the touchscreen system, it represents a huge improvement over the audio system in my vehicle, which is supposed to look like a custom aftermarket head unit but looks more like a Playstation 2 controller to my eyes.

The Scion xB is a cheap car, and options are installed by the dealership. That means that aside from the basics, few safety technologies are available. Scion does, however, install its Smart Stop Technology in the xB, which is designed to make it impossible to accelerate the vehicle as long as the brake pedal is pressed. A first-aid kit is also standard equipment.

The National Highway Traffic Safety Administration (NHTSA) hasn’t performed crash tests on the Scion xB since it last raised standards for the 2011 model year. The Insurance Institute for Highway Safety (IIHS) has, though, and gives the Scion xB the top rating of “Good” for all tests that have been conducted. Note, though, that the IIHS has not assessed the xB in the tough new small overlap frontal-impact test.

Toyota installs a 2.4-liter 4-cylinder engine into every xB, one that makes 158 horsepower and 162 lb.-ft. of torque. A 5-speed manual gearbox is standard, with a 4-speed automatic transmission offered as an option. Since the xB weighs just over 3,000 pounds, the engine provides merely adequate acceleration. At least the 4-speed automatic transmission holds a gear for hill climbing, and offers a manual shift mode to make the best of the available power.

The yester-tech transmissions are the main reason that the Scion xB doesn’t get very good gas mileage. Regardless of which transmission you choose, this car is rated to get 22 mpg in the city, 28 mpg on the highway, and 24 mpg in combined driving. I did better than that, at 26.7 mpg, but I spent most of my time driving on the highway.

In any case, the Scion xB is basically bulletproof, according to Consumer Reports, which gives this model its highest rating for reliability. Plus, Scion throws in free maintenance for two years or 25,000 miles. Are these worthy trade-offs for unimpressive fuel economy? You be the judge.

Around town, the xB provides a firm ride and rather nimble handling. It turns into a corner with enthusiasm, ultimately let down by all-season tires and lots of weight over the car’s nose. When driven on a twisty two-lane road, the xB demonstrates predictable handling primarily limited by its modest tires. The car feels like it is going much faster than it really is, and while the xB lacks an independent rear suspension, it does come with 4-wheel-disc brakes that do a good job of hauling the car down from speed.

Dealer-installed Toyota Racing Development (TRD) accessories can make a big difference in terms of the xB’s handling. Larger aluminum wheels, more aggressive tires, suspension upgrades, and a performance braking kit possess dramatic potential to improve the fun-to-drive quotient. Add TRD powertrain improvements, including a performance air intake and air filter, a sport-tuned muffler, and, if you can row your own gears, a performance clutch kit and a quickshifter kit, and the xB feels even livelier. Install all of these features on a Scion xB with the optional automatic transmission, and the price tag rises to $24,588.

Unfortunately, the TRD catalog offers no solutions for what primarily ails the Scion xB. On the highway, the xB is loud inside, suffering a mix of wind, engine, and road noise in equal measure. In combination with the uncomfortable driving position and electric steering that lacks on-center feel and stability, these factors make a stock xB a chore to drive for longer periods of time.

There’s no question that the Scion xB represents an acquired taste, especially in this appropriately named Absolutely Red color, but if you like its alternative approach to design and don’t mind its lackluster fuel economy, there’s genuine merit in this funky 5-door hatchback. Cheap, reliable, simple, safe, and roomy, the unusual Scion xB is worthy of consideration if you find it to be comfortable. Plus, the xB serves as a canvas that can be customized, either all at once or as you save for upgrades.

The current version of the xB might be seven years old now, but as the old saying goes, you don’t fix what isn’t broken.

Scion provided the 2013 xB for this review 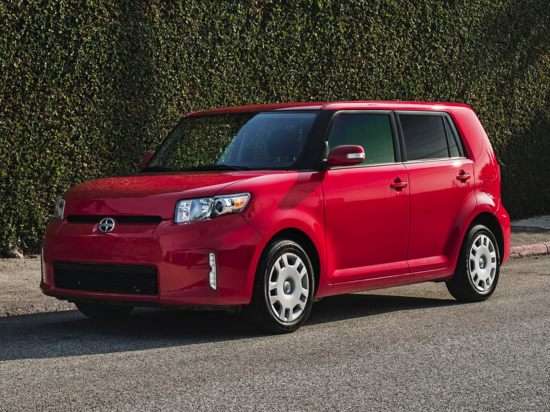