A careful examination of the minivan market might lead most buyers to conclude that almost every possible design variation and drivetrain arrangement has been tried. From the upright and ice-maker equipped Toyota Van to the futuristic Chevrolet Lumina, minivans have been subjected to a number of attempts to help dress up their traditional box shape in an effort to get the public interested in what is fundamentally a utilitarian vehicle. By their very nature, vans are limited to a design which can accommodate a large number of passengers and cargo, and this means that few concessions to style can be made.

When Toyota created its Scion division in the early 2000s, the idea was to attract a young crowd of car buyers who had so far ignored most of the Toyota lineup in favor of more exciting offerings from other import and even domestic car companies. Toyota knew that there were two ways to get to the heart of consumers in the coveted 30-and-under group: style and performance. Having already decided to cover the latter with the quick and agile Scion tC coupe, Toyota directed Scion to come up with an imaginative take on the traditional people mover. Using some of the compact city vehicles popular in Japan as inspiration, Scion was able to come up with the xB micro-minivan.

Perhaps the most interesting thing about the xB's design is the way the vehicle doesn't attempt to disguise the 90-degree angles of its rectangular shape. In fact, the xB plays up the fact that it's a simple box with wheels and a snub nose and in doing so creates an honest, up-front image that has found a huge fan base. The Scion xB not only appeals to those looking for economical, quirky and stylish transportation, but it has also struck a chord with car customizers who see the vehicle as the perfect canvas for a wide range of potential modifications.

Taking risks with design doesn't always pay dividends - witness the ungainly Pontiac Aztek or the anteater nose of the Subaru B9 Tribeca - but for Scion, the xB gave the new brand a calling card that would stick out in people's minds and help create the perception of an edgy company that built interesting cars. There are few drivers on the road who haven't had their heads turned by the xB, the best used minivan built by Scion and a great value for secondhand car buyers.

It's important to get one thing out of the way up front: the 2004 - 2007 Scion xB's looks aren't for everyone. With its tall roof and slab sides, the van has a straightforward appearance whose lack of ornamentation is off-putting for some and perfect for others. The xB appeals not only to the young, but also to drivers of all ages who are fascinated by the automobile's incredible practicality and ease of use.

The Scion xB is certainly no speed demon. All editions of the first generation of this compact minivan are outfitted with a tiny 1.5 liter 4-cylinder engine that puts out 108 horsepower and 105 lb-ft of torque. A 5-speed manual transmission is provided as standard equipment, and a 4-speed automatic can be ordered for those who prefer to leave the shifting duties in the hands of a computer. For most drivers, the slower acceleration of the xB isn't a problem, as the automobile is prized more for its utility than its drag strip skills. Fuel economy in town is an excellent 30 miles per gallon, a number that increases only slightly to 33 on the highway thanks to its non-aerodynamic shape.

Despite its diminutive size, the 2004 - 2007 Scion xB offers a maximum of 43 cubic feet of cargo space with the vehicle's rear seats out of the picture. Passenger accommodations are acceptable, if not spectacular, and although seats are not especially supportive the cabin is quite spacious in all the important places - knee, shoulder, head and leg. The vehicle's gauge pod is mounted at the center of the dashboard, similar to other small automobiles sold by parent company Toyota, and a number of fun personalizing touches can be ordered to dress up the xB both inside and out.

The 2004 - 2007 Scion xB is a fun and definitely different used minivan that offers great mileage, a solid ride and styling that is guaranteed to spark conversations at gas stations and parking lots across the country. 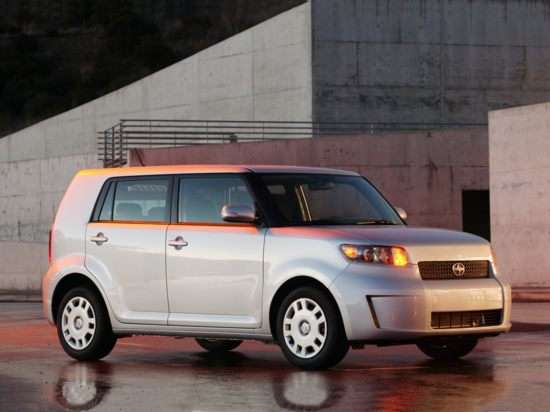