One of the oldest members of the Scion family is the tC coupe. Introduced back in 2004 as a 2005 model, the tC was the brand's entry into the compact coupe marketplace. Before anyone knew it, the tC took a nice chunk of the compact coupe market and became one of Scion's best sellers. Scion is hoping to continue that trend with the introduction of the redesigned 2014 tC.

The basic profile of the 2014 tC is very much the same as the original tC. The difference between the two is that the 2014 model trades in the rounded edges for more angles. The 2014 model also gains a new front end that features a larger, lower grille, new headlights, hood, and LEDs. Scion says this is to give the tC a look that is at least somewhat like the FR-S. A set of eighteen-inch alloy wheels add a sporty touch.

Inside, the tC features a dashboard that is oriented to the driver and two glass panels that help bring in light. The backseat can fit two adults comfortably. Standard equipment is very generous with a 6.1-inch touchscreen with Pioneer audio system and Bluetooth, keyless entry, A/C, cruise control, power windows, and power locks. Optional is Scion's BeSpoke audio system which adds navigation and Aha internet radio.

Power comes from a 2.5L four-cylinder engine with 179 horsepower and 172 pound-feet of torque. The engine can be paired with a six-speed manual or six-speed automatic. Fuel economy is rated at 23 City/31 Highway/26 Combined for both transmissions. Scion has also retuned the suspension and electric steering system. 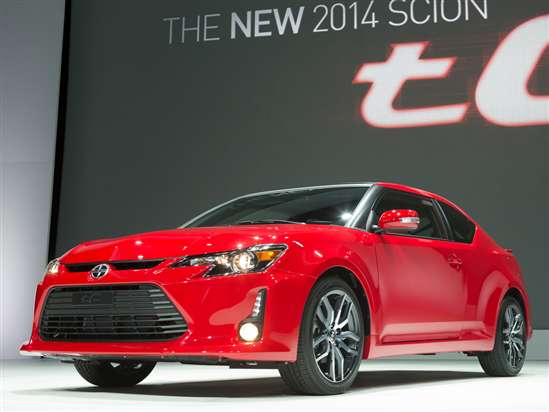