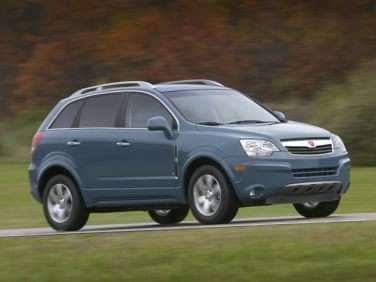 All About Saturn VUE

This is a four-door five-passenger sport utility vehicle. The Saturn VUE was first introduced in 2002 as Saturn’s first entry in to the more car-like small SUV market. To make sure the vehicle was a full on success, Saturn VUE came equipped with unique drivetrain options and a very competitive price. The first Saturn VUE had decent sales, but not overwhelmingly high. Saturn made steady improvements over the years. The new, second-generation Vue had many new features added. The new VUE is similar in structure to the Antara, a small SUV, which is produced by GM’s German division. The VUE has steadily gained in popularity as it is a lot of SUV for the decent price.

The 2008 Saturn VUE offers six trims with AWD and FWD versions of the XE, XR and Red Line. Under the hood of the XE is a 2.4 L I4 engine which is paired with a four-speed automatic transmission that produces 169 hp. For the Red Line, there is a 3.6 L V6 engine with overhead-cam with variable timing that produces 257 horsepower. Both of these V6 engines are matched to a six-speed automatic transmission with overdrive. For the 2009 models, the trims are the same but there is a new four cylinder XR trim this year.

The EPA fuel economy rating for the Saturn Vue FWD 4-Cylinder XE is 19 miles per gallon in the city and 26 mpg on the highway.

There is also a Saturn VUE Green Line for those consumer's interested in a hybrid - this system is attached to the four-cylinder engine and four-speed automatic transmission. This motor system helps the gasoline engine during acceleration and it stores the energy that would otherwise have been lost during braking or coasting.

The VUE can carry five passengers and the back seat offers the standard 60/40 split that folds forward to offer more cargo space. This vehicle is slightly smaller than some of the other compact SUVs on the market and offers only 56 cubic feet of cargo space. The rear passenger area of the vehicle has reclining rear seats and decent legroom.

The Saturn VUE makes a decent weekend get away vehicle as it can tow a trailer up to 3,500 pounds. The vehicle is equipped with a special trailer sway control feature integrated into the stability control system. It can detect when the trailer sways during towing and can apply the brakes when required to help restore stability.

The safety standard for the VUE is high. There are stabilizer bars in the front and the back for the four-wheel independent suspension, four-wheel disc brakes with anti-lock system. There is electronic stability control, active head restraints, front-seat side air bags, and rollover-capable head-curtain side bags for front and rear rows.

The 2009 Saturn VUE is a carryover from 2008. The 2009 VUE is offered in XE FWD, XE AWD, XR-4 FWD, XR-V6, Red Line and Hybrid trims. The XE FWD model makes use of a 169 horsepower, 2.4 liter 4-cylinder engine that also offers 161 lb-ft of torque and fuel economy of 19 miles per gallon in the city and 26 miles per gallon on the highway. A 4-speed automatic is the only transmission choice. The XR-4 FWD also shares the same drivetrain. The XE AWD upgrades buyers to all-wheel drive, a 6-speed automatic transmission and a 3.5 liter V6 that punches out 222 horsepower and 219 lb-ft of torque. Fuel mileage drops to 16 miles per gallon around town and 23 miles per gallon on the highway.

The XR-V6 trim is offered in both front-wheel and all-wheel drive, and underneath the hood is a robust 3.6 liter V6 engine producing 257 horsepower and 248 lb-ft of torque. Mated to a 6-speed automatic, the XR-V6 shows fuel economy of 17 miles per gallon in city driving and 24 miles per gallon on the highway, with all-wheel drive models getting slightly lower mileage during high speed cruising. This drivetrain is also found in the Red Line model.

The 2009 VUE Hybrid combines an electric motor with a 2.4 liter, 4-cylinder motor to offer 172 horsepower and 167 lb-ft of torque. The Hybrid is front-wheel drive only, and a continuously-variable automatic helps to contribute to fuel economy that is rated at 25 miles per gallon in the city and 32 miles per gallon on the highway.