An inexpensive, ho-hum hybrid with a promise of 32 mpg highway

Introduction
By Thom Blackett
Saturn VUE Green Line: First Drive – Timing is everything. Just ask Ford Motor Company, the struggling domestic automaker that recently suffered its share of backlash for abandoning its pledge to produce 250,000 hybrids annually by 2010. A few weeks later, in light of Toyota’s success in selling tens of thousands of hybrid vehicles per year, word came that the U.S. Congress was considering offering more incentives for hybrid ownership. Ouch.

Suffering its own share of lumps over the years, General Motors – for once – found itself in the enviable position of not only presenting its 2007 Saturn VUE Green Line hybrid SUV to the press, but also confirming for those who weren’t sure that a Saturn AURA hybrid sedan will be arriving within six months or so, with a Chevrolet Malibu hybrid sedan arriving soon thereafter. Unlike the two-mode systems featured on the upcoming large GM SUV hybrids, the Vue Green Line, Aura Green Line, and Malibu hybrids couple a traditional four-cylinder engine with an electric generator and a battery pack. Details are sketchy on the sedans, but the 2007 Saturn Vue Green Line, due to hit the streets mid-summer 2006, was made available to members of the media for a short drive around Santa Monica, Calif. What we found was an SUV that falls short on both driving excitement and materials quality, but promises to raise a few eyebrows with a $22,995 starting price and claims of 32 mpg on the highway.

Features Despite plenty of standard equipment, the Saturn Vue Green Line’s base price is attractively set at $22,995. Fully loaded, the price climbs to $26,820.

It may be the least expensive hybrid SUV currently on the market, but buyers of the 2007 Saturn Vue Green Line will still be able to enjoy a generous list of appointments. Among them are 16-inch alloy wheels wrapped in 215/70 low-resistance General tires, cruise control, keyless entry, 12 months of OnStar service, a CD player, steering wheel-mounted controls, a rear spoiler, traction control, power door locks, and power windows. Also standard is an air conditioning system with two settings: tapping the button brings up a green light for economy mode, which keeps you cool if not frigid; two taps gets a yellow light and maximum cooling. The hybrid system includes an auto-stop feature that turns the engine off for up to two minutes while stopped, allowing for improved fuel economy. However, the feature is canceled when the A/C is set to maximum cooling.

Despite the inclusion of such features, Saturn has held the base price of the Green Line to $22,995, including a $625 destination charge. However, if you’d like a bit more luxury with your hybrid SUV, Saturn offers options such as a $725 power moonroof, a $755 leather package, upgraded audio and DVD systems running as much as $1,140, and a Comfortably Safe Package that includes side-curtain airbags, XM satellite radio, a power driver’s seat, and heated front buckets. Fully loaded, the Vue Green Line carries a sticker price of $26,820.

Nuts and Bolts Despite carrying an extra 160 pounds, the Vue Green Line is expected to see a 20-percent gain in fuel economy and reaches 60 mph a full second faster than a gas-only Vue.

Unlike most hybrid vehicles, the 2007 Saturn Vue Green Line uses a rather low-tech four-speed automatic transmission to transmit power to the front wheels. The Green Line’s platform allows for all-wheel-drive capability, though there’s no word on if – or when – an AWD Green Line will be made available. For now, Saturn’s hybrid SUV is a front-driver with an aluminum 2.4-liter, dual overhead cam, 16-valve four-cylinder engine ponying up 170 horsepower at 6,600 rpm and 162 lb.-ft. of torque at 4,400 rpm. The hybrid system consists of a five-kilowatt electric motor, or generator, bolted onto the engine to replace the traditional alternator, working in conjunction with a 36-volt NiMH battery pack located beneath the front portion of the cargo floor. When extra power is needed, the electric motor “assists” the gas engine; the battery pack is recharged via regenerative braking and is designed to kick in as soon as the driver lifts off the throttle. All told, the hybrid version of the Saturn Vue weighs about 130 pounds more than its gas-only counterpart, and should return 27 mpg city and 32 mpg highway, representing a 20-percent gain in fuel economy. Also interesting to note is that the hybrid’s battery assistance helps the Green Line reach 60 mph a full second faster than a traditional four-cylinder powered Vue, at a still leisurely 10.2 seconds.

Design Looking much like a regular Vue, the 2007 Green Line adds only alloy wheels, a rear spoiler, chrome accents, special badges, and a few tweaks to the gauge cluster.

Not long ago, hybrid vehicles could be pinpointed from miles away. The Honda Insight is the perfect example, with its rear wheel skirts, tapered tail, tiny tires, and disc-like wheel covers. Toyota’s Prius is another one, past and present versions, that appeals to buyers interested in equal parts efficiency and social awareness. However, recent introductions, such as the Toyota Highlander Hybrid and Honda Accord Hybrid, have toned things down considerably, with visual cues limited largely to a few badges or a unique set of alloy wheels. It’s along this same vein that 2007 Saturn Vue Green Line travels, looking much like a regular Vue, albeit with standard alloy wheels, a rear spoiler, strategically-placed badges, and chrome strips on the lower sides of the fascias. Inside, differentiating gas from hybrid models is similarly difficult, as the only distinctive points are the hybrid’s Charge/Assist gauge, the green A/C button, “Auto-Stop” and “Off” script on the speedometer, and an Eco light that flashes when current mileage is surpassing EPA mpg estimates. Curiously missing is an actual trip computer that displays average and instant miles per gallon, something buyers so obviously interested in fuel economy will miss considerably.

The 2007 Green Line does get the freshened interior first introduced on the 2006 Saturn VUE. The dash has been updated for a more attractive look, and the materials, known for feeling especially flimsy and cheap, have supposedly been upgraded. We found them to be a slight improvement, though all except the dash cap are hard and grainy, suggesting that the interior is one area Saturn chose to keep costs down for that sub-$23,000 starting price.

With few exceptions, hybrid vehicles are marketed primarily on lofty fuel economy figures and not drag-strip performance. After a short drive around Santa Monica and a few miles along the Malibu coast, it’s obvious that the Vue Green Line’s success will depend entirely on price and that 32-mpg highway rating. Those 170 horses do their best, and that four-speed automatic has had decades to learn about acceleration and shift points, but there’s only so much you can ask of this powertrain. For example, you can ask it to provide enough power to maintain adequate highway speeds and to provide enough scoot for busy city streets; you can’t ask for anything better than 10.2 seconds to 60 mph, and while you can request a transmission that doesn’t constantly hunt for the right gear on the freeway, you ain’t gonna get it.

OK, it’s a little sluggish. That’s not exactly a shocker. Neither is the odd braking sensation when lifting off the throttle as the hybrid’s computer cuts engine power for improved efficiency, or when the regenerative braking system captures energy as the stop pedal is depressed. All of this technology working behind the scenes improves efficiency, and Saturn claims it significantly increases brake pad life, but the driver will have to put up with pedal pressure that’s hard to modulate. When at a full stop, the speedometer needle will rest at Auto Stop, signaling that the engine has clicked off while the generator is powering all of the vehicle’s accessories. If the air conditioning is set to maximum cooling (yellow light above A/C button instead of green) the engine will remain running. Saturn claims the Green Line can reach five mph on electric power only, but in reality the engine usually kicks in as soon as pressure is lifted off the brake pedal. A Charge/Assist gauge on the right of the cluster shows when the battery pack is supplying power or being charged, and a green Eco light beams when instantaneous fuel economy is beating the EPA estimate – great, but plenty of fuel-conscious buyers may prefer a trip computer with an average and instant mpg readout (like us – we didn’t get a chance to fill up, so can’t a offer real-world fuel economy figure).

All other aspects of the Green Line’s driving character mimic those of the regular Saturn Vue. The ride is controlled, albeit exhibiting more than one SUVs share of body roll; the steering gets the job done with a vague feel; and the tires cry in protest when challenged. Inside, the driver and front passenger are treated to comfortable bucket seats with fold-down armrests, while up to three rear passengers get a flat bench that sits too low to the floor, serving to limit knee room for taller riders and making the view out of the front glass diminished for all.

FAQs The 2007 Saturn Vue Green Line requires a $2,000 premium over the regular Vue and carries an eight-year/100,000-mile warranty on its battery pack.

How does the 2007 Saturn Vue Green Line measure up against other hybrid SUVs?
During the press event Saturn representatives discussed a third-party test of four hybrid SUVs: Saturn Vue Green Line, Ford Escape Hybrid, Lexus RX 400h, and Toyota Highlander Hybrid. As expected, the Green Line beat them all in terms of price (about $3,000 less than the Escape and $22,000 less than the Lexus). The Green Line also did well in terms of real-world fuel economy, measuring 29.7 mpg in combined driving versus 31.6 for the Ford, 30.5 for the Toyota, and 28.9 for the Lexus. That information is useful for a general comparison, though we should note that our own tests of the Ford Escape and Toyota Highlander resulted in significantly lower numbers.

Is there a specific warranty on the Saturn Vue Green Line’s hybrid battery pack?
Yes. The battery pack is covered by an eight-year/100,000-mile warranty.

What is the price difference between the Saturn Vue Green Line and a regular Saturn Vue?
There’s a premium of about $2,000 for the 2007 Green Line when the regular Vue is comparably equipped with optional alloy wheels, a rear spoiler, ABS, and chrome fascia trim. 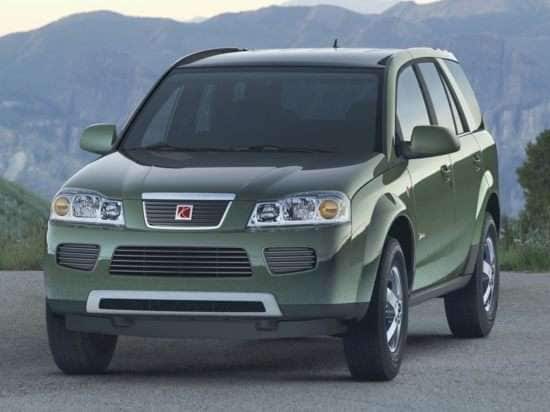