Get a Vue of lower gas bills

What’s New – The 2008 Saturn VUE Green Line comes with all the goodies available in the revamped 2007 Vue. What’s new for this version of the Euro-styled, no-longer-boxy Saturn crossover is the hybrid drivetrain, boosting economy numbers into more environmentally-friendly territory.

Why It Matters – Styling, utility, economy and an environmental conscience are rarely combined into one neat package. The 2008 Saturn VUE offers an upscale appearance, sport utility usefulness, and the peace of mind afforded from driving a hybrid. All that and it still comes in at an affordable starting price of $25,995. 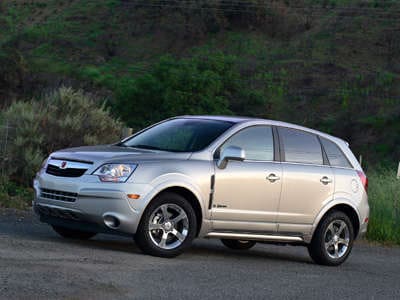 Saturn Vue Green Line – 2008 Review: First there was the family station wagon: Mom’s car used to haul the kids to school and pick up groceries. In time, wagons went out of style and were replaced by the minivan – the motorized domain of soccer moms and dads. Eventually, we grew tired of these stereotypical family vehicles, and turned to SUVs, but as gas prices went up these proved to be too expensive.

Up next was the car-based SUV, or crossover, a ride with room for stuff and better fuel economy. It only seems natural, then, that the next progression in the pursuit of the perfect grocery getter/kiddie taxicab/daily commuter would be a hybrid version like the Saturn Vue Green Line, a crossover that embodies utility and the ability to shuttle passengers, embraces environmental responsibility, and keeps more funds in the family checkbook.  This is not the perfect hybrid, however, a point Saturn is obviously aware of given the announcement that a more-efficient two-mode system will be arriving in the 2009 Vue. But it does offer an alternative to the Ford Escape Hybrid, Mercury Mariner Hybrid and Mazda Tribute Hybrid. The 2008 Saturn Vue Green Line has put Saturn onto the future playing field, scoring points in some areas, giving some up in others. In the end, given the competition, we think the Vue came out a winner, even if only by the slightest of margins.

The Green Line’s hybrid system utilizes a start/stop feature that boosts fuel economy by turning the engine off while at idle. It also uses regenerative braking to charge its batteries as well as an early fuel cutoff system that operates during deceleration. This is standard hybrid technology, but it’s effective.

Safety features include side-curtain air bags, but the idea is to use avoid using them. To that end, Saturn has packed the Vue Green Line with ABS, traction control and GM Stabilitrak to provide the driver with a greater degree of confidence. Also featured is an electronic trailer sway control to help prevent accidents while towing.

OnStar is standard on the Vue Green Line for the first 12 months, but the system’s Turn-by-Turn navigation service will cost extra. However, being worry-free about locking your keys in the car for that first year is a great bonus. In addition, OnStar notifies emergency services in case of an airbag deployment, can track your car if it has been stolen car, and offers hands-free voice-activated calling.

Front passengers are protected by side-impact airbags while front and rear outboard passengers are protected by side-curtain airbags. Keeping you on the straight and narrow are the StabiliTrak stability control, traction control, and a tire pressure monitoring systems. However, there is one situation the Vue is not prepared for -- the common flat tire. Instead of the spare featured with other Vue models, Saturn cut down on the Green Line’s weight by including a foam storage compartment and an air compressor under the cargo mat. Anything other than a slow leak and you’ll have to wait for the cavalry to come and rescue you.

Inside, mood music is provided by a six-speaker sound system with a CD/MP3 player and three months of XM Satellite radio service. Unfortunately, you can’t get a CD changer in the Green Line. An exterior temperature gauge is standard, as is an air conditioning system with a hybrid mode that can be engaged with a press of a button to help maximize fuel economy. Other standard amenities include cruise control, keyless entry, power door locks, and power windows.

The Green line is a crossover built for economy and not speed, so its hybrid powertrain pairs an electric motor with a 2.4-liter four-cylinder engine, the smallest available in the Vue lineup. The four-banger puts out 172 horsepower at 6,500 rpm and 167 lb.-ft. of torque at 4,500 rpm. It’s mated to a four-speed automatic transmission with a manual mode.

EPA-estimated fuel economy for the Green Line is 25 mpg city and 32 mpg highway. To achieve these numbers the Vue uses its electric motor to aid with acceleration, employs start/stop technology to shut off the engine at idle, cuts off fuel early during deceleration, and uses regenerative braking to capture what would otherwise be wasted energy as the vehicle comes to a stop. All that hybrid technology is supported on the same four-wheel independent suspension found in other Vues, with a front stabilizer bar and three-link rear locating arms. Steering is the work of an electric rack-and-pinion setup. 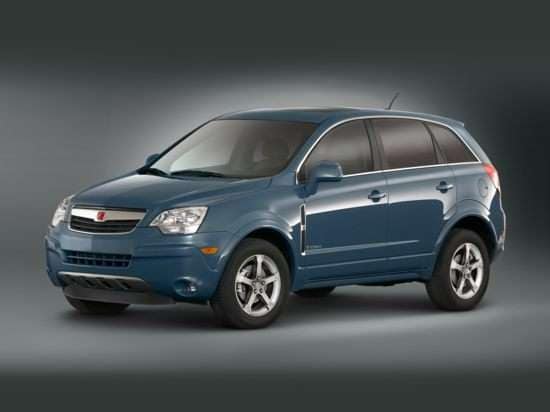