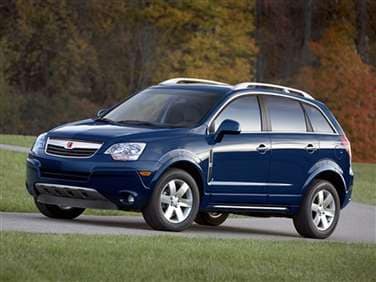 All About Saturn VUE Green Line

The Saturn Vue Green Line Hybrid won’t put a hole in the ozone or your pocket. Available in front wheel drive only, the five passenger vehicle features a “single mode” hybrid system, meaning that the engine completely shuts off when the vehicle stops. And lucky for those with a small budget, the price tag is an affordable $22,000 to $26,000.

As the Green Line website boasts, the Vue is a “beautifully styled compact crossover... [that is] remarkably intelligent.” It’s true. The exterior is one of the sleekest in the hybrid biz, while the interior and performance characteristics are certainly smart.

The exterior’s subtle detailing – unassuming fender flares, a slightly rounded roof, and a glossy yet modest front end – give it a sleek sportiness that is lacking in nearly every other hybrid on the market. The clever front fender appliqués also hold side turn-signal lights while the “hard” radial tires are less resistant therefore need less power to get rolling. These understated features are what truly make the Vue’s handsome exterior unique in its class.

The interior, though not supremely luxurious, suits the purpose. It is similar to the recent redesigns of the Chevy Tahoe and Buick Lucerne in that it combines typical plastic with chrome trim. The front bucket seats are made of easy to care for cloth and are cozy enough to take you comfortably from point A to B. The roomy 60/40 split rear seats expand to take cargo space from 26.5 cubic feet to 54.3. But that doesn’t include the front passenger seat folding flat for additional carry space and the flip-up floor in the back end and its useful carry compartments.

While the smart and considerate inner and outer features are pleasant, it is the performance components that make the hybrid desirable. Unlike other hybrids, the Vue boasts a conventional 4-speed automatic transmission. The driving characteristics of the Vue's hybrid drivetrain are almost impossible to differentiate from a non-hybrid drivetrain, aside from the universal hybrid stop/start. The stop is incredibly smooth and the start, nearly undetectable due in part to the “mild” drivetrain and the fact that all interior features like AC and radio stay aptly tuned during the transition.

Though there have been complaints about slow acceleration, the fact of the matter is that the 2.4 liter 4-cylinder engine, combined with the electric motor/generator produces a respectable 170 horsepower and average acceleration. The system also comes with the capability to tow 1500 pounds and the vehicles is equipped with excellent standard safety features including antilock brakes, side impact airbags for front, side curtain airbags, active front head restraints, electronic stability control GM’s rollover mitigation system. Additional standard equipment includes OnStar, cruise control, AC, XM satellite radio, power windows locks mirrors, and an excellent 8-year/100,000 mile warranty make for a peace of mind and a comfortable, convenient ride.

There is a lot to love about the new Saturn Green Line:

Though the Saturn Green Line vehicles aren’t super-sophisticated with massive fuel economy like the competing Toyota Prius, there is no denying that the Saturn Green Line cars are reliable, sensible, and comparative. Many buyers also consider the Green Lines as better styled and features better handling than its hybrid counterparts. If you want a hybrid vehicle that is practical in more ways than one, the Saturn Vue Green Line should be on your list.

The Future of the Saturn Green Line

While the 2008 Vue has had its share of mild reviews, the next generation promises more: