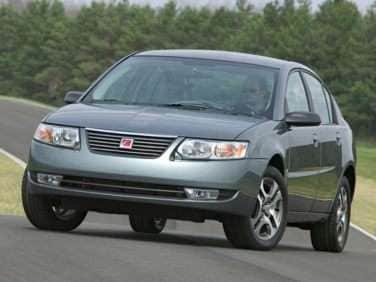 All About Saturn Ion

This Saturn Ion is a four-door five-passenger compact sedan. The Saturn Ion was an entry level car Saturn first introduced in 2003. The target market for this vehicle was geared for the younger consumers, offering unique styling and design features. For all the marketing, the Ion never became hugely popular. The last year it was offered was in 2007. For 2008, the Ion was replaced with the Saturn Astra.***** The original Saturn Ion came in as a replacement for the old S-Series. During the five years of production some improvements were made, particularly in 2005 where the ride, interior and overall refinement received some minor upgrades. For this reason, the later model years are the more popular in the used car market.

The Saturn Ion is a front wheel drive car was offered in two body styles. These are the four-door sedan and the ‘Quad Coupe.’ The latter looks like any other two door coupe but has unusual two rear opening doors - think rear doors on an extended-cab pickup. Originally, the vehicles were available in three trims - Ion 1, Ion 2 and Ion 3. The base level 1 was dropped from the line in 2006. The Quad Coupe had a performance trim available as well called the Red Line. For 2007, the trims are Ion 2,Ion 3 and Red Line.

For each trim level except the Red Line, there is is a 2.2 L four cylinder engine offering 145 horsepower. The Red Line sees the installation of a 2.0 L four cylinder engine that boosts the horsepower up to 205 hp. For this engine, there is a close-ratio five-speed manual transmission only. In the 2006 and later models, the Ion 3 trim sedan received a bigger engine as part of the Enhanced Performance Package - a 2.4 L four cylinder engine with variable valve timing that produced 175 hp. The package was only available on this trim and also included anti-lock brakes, traction control and a lovely sport-turned suspension. In most cases, these engines are paired to a five-speed manual transmission.

For all the problems the Ion may have, such as poor interior and unimpressive drivability and very odd styling, the Ion came out on top for cargo room. The front seat can fold flat increasing what was already the largest amount of trunk space for its class.

The basic Saturn Ion models are very slim on extra features. The Ion 2 only has a power locks, Onstar and a CD player. There is a Preferred Package available for this trim, which adds in power accessories, cruise control, a driver-seat height adjuster and keyless entry. With the Ion 3 also comes 16-inch wheels and tires, an upgraded CD/MP3 audio system and cruise control. The Ion 3 additionally features the Enhanced Performance Package.

Features for 2007 Saturn Ion Red line include 17-inch wheels and upgraded disc brakes. Options for this line include a choice of rear spoilers and the Red Line Competition Package that adds a limited-slip front differential, alloy wheels, and a couple of new gauges like a boost gauge and a programmable tachometer that lights at certain rpm levels.

When it comes to safety, the Ion did perform well. In NHTSA frontal crash tests, both the coupe and sedan receive a five star rating for driver and front-passenger protection. In the side-impact testing for an Ion sedan, it received only three stars for the front occupants and four stars for the rear passengers. The door model received a four star rating for both the front and rear occupant in the side impact tests.

Optional safety features include anti-lock brakes with traction control for the Ion 2 and 3, whereas they are standard on the Red Line. Optional are full-length side curtain airbags. The OnStar system is standard.