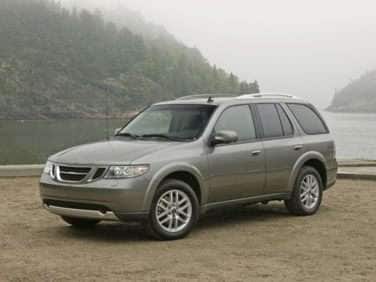 The Saab 9-7X is a four-door all-wheel drive sport utility vehicle. The Saab 9-7X was first introduced to the market for the 2006 model year. The only change, as this vehicle moved into 2008, is the addition of the Aero model. There were no major changes as the vehicle enters 2009.

The Saab 9-7X has the easily recognizable Saab grille, badging and the floor-mounted ignition. However, this vehicle shares the same platform with GM’s other truck size SUV line. This SUV has seating for five adults. There is no third row seat available even as an option. The cargo space is sufficient for most consumers’ needs at just under 40 cubic feet with the seats up and occupied.

The interior offers leather covered steering wheel, power adjustable foot pedals and coordinating carpet floor mats from the front to rear. For ease of traveling there is a trip computer with controls mounted to the steering wheel. There is also cruise control, tachometer, and built in compass.

The interior of the vehicle shows the influence of GM over its Saab origins. There is no turbo engine, which you'd expect of a Saab and the interior resembles many other GM vehicles in spite of the cockpit style cabin. The Saab 9-7X has a nice selection of features including such luxuries like leather seating, heated front seats and even a Bose stereo with six-CD changer and six speakers. Communication wise there is also a satellite system and OnStar. Other features include XM Satellite radio, front power glass tilt and slide sunroof, climate control air conditioning with separate driver and front passenger climate controls.

Options for this vehicle include a navigation system, Xenon High Intensity Discharge Headlights, Power Adjustable foot pedals and a rear-entertainment system. For the Aero, there are also 20-inch wheels and sport trim as well as a specially-tuned chassis.

There also a full complement of anti-theft devices like vehicle anti-lockout, OnStar radio anti-theft, and even Vehicle anti-theft via alarm and Passlock engine immobilizer. There is also remote keyless entry, panic alarm and a remote liftgate glass release.