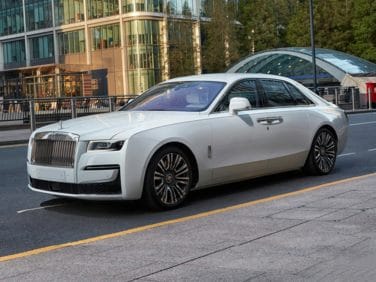 All About Rolls-Royce Ghost

Developed under the code name RR04, the Rolls-Royce Ghost model was initially shown at the 2009 Geneva Auto Show as a concept car called the 200EX. The goal was to produce a more ‘everyday” type of Rolls-Royce, one an owner would consider using as something of a daily driver.

The production version of the Rolls-Royce Ghost was officially unveiled at the Frankfurt Motor Show in 2009. The car went on sale in the United States in 2010. For the 2012 model year, Rolls–Royce introduced an extended wheelbase version of the Ghost at the Shanghai Motor Show.

Where the larger Phantom models use aluminum to add lightness, the Ghost is constructed of high tensile steel. Among the innovations introduced with the smaller Rolls-Royce is a smart four-corner air suspension system. Controlled by onboard computers, the system works hand in hand with the Rolls-Royce’s active roll stabilization system and the variable damping control system to provide exceptional handling characteristics while maintaining the ride comfort expected of any Rolls-Royce.  It is said the system is so intelligent it can actually detect when a passenger has moved from one side of the back seat to the other and adjust the responsiveness of the suspension system accordingly.

A 563-horsepower, 6.6-liter twin turbocharged V12 engine supplies power. Mated to an eight-speed automatic transmission, the engine’s output is fed to the rear wheels, The engine is capable of generating 575 ft-lbs of torque. Fuel economy is rated at 13 miles per gallon in the city and 20 on the highway.

Standard equipment includes the active air suspension system, power actuated rear doors (they close themselves at the touch of a button), umbrellas stored in the front doors, four-zone automatic climate control, smart headlights, smart wipers, smart cruise control, and of course—keyless entry and start. Optional kit includes wood picnic tables, lane departure warning, a color head-up display, and night vision with pedestrian detection. If it sounds suspiciously like we’re reading from the options list of the BMW 7 Series, this is because the Rolls-Royce Ghost is loosely based on the BMW 760iL long wheelbase sedan.

BMW has owned the right to produce Rolls-Royce models since 2003 when it got control of the name. The current (November 2013) Rolls-Royce model range is comprised of the Ghost, the Phantom sedan, coupe and drophead (drophead is English-English for convertible), and a coupe model based on the Ghost called the Wraith.