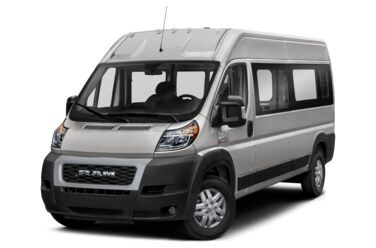 All About RAM ProMaster 2500 Window Van

RAM Trucks is a brand of pickup trucks that are designed and manufactured by Chrysler Group LLC. The Detroit auto manufacturer used to produce RAM pickup trucks under the company’s Dodge brand of vehicles. Dodge started selling pickup trucks with the Ram name in 1981, but Chrysler decided to spin off RAM into a separate brand, as part of its post-bailout corporate restructuring and Chrysler’s acquisition by the Italian auto manufacturer Fiat. For the 2014 model year, Chrysler added a lineup of cargo vans to the RAM brand. The RAM ProMaster line was initially designed for the European market, and ProMaster cargo vans are known in Europe as the Fiat Ducato. The Mercedes Sprinter is now the RAM ProMaster’s most immediate competition, along with the Nissan NV. The RAM ProMaster 2500 Window Van, like the other models in the RAM ProMaster family, is assembled in Satillo, Mexico.

The RAM ProMaster 2500 Window Van was introduced at the Chicago Auto Show in February of 2013, alongside the rest of the RAM ProMaster lineup. The model number designations for each RAM ProMaster van are not dependent on the van’s drivetrain or engine power, since all ProMaster cargo van models in North America offer the same engine options. However, the Window Van body style is only available in the RAM 2500 trim. The base RAM ProMaster 2500 (like the ProMaster 1500 and 3500) is powered by a 3.6-liter V6 gasoline engine that yields 280 horsepower, which is paired to a six-speed automatic transition. An additional drivetrain option provides a 3-liter four-cylinder turbodiesel that produces 174 horsepower, and is paired to a six-speed automatic manual transmission. Both drivetrain options have specific benefits, since the diesel engine provides better fuel economy as well as more torque for smoother towing, but the gasoline engine is capable of faster acceleration than the diesel.

The ProMaster 2500 Window Van does not differ much from the standard ProMaster 2500 or the other ProMasters in the lineup, except for the full size windows lining both sides of the body. Cargo vans of European origin feature several distinct characteristics to improve efficiency. The van features a front-wheel-drive layout that does not compromise the van’s cargo space. The body is about a foot and a half taller than an American van, which allows plenty of extra interior volume and is tall enough for people to move easily inside. The ProMaster 2500 and 2500 Window Van was designed to slot between the smaller 1500 and the larger 3500, and is available only with the high roof body style. The RAM ProMaster 2500 Window Van comes only in the long wheelbase, 159-inch version. This ProMaster also features a heavy duty suspension and heavy duty ABS disc brakes at all four corners. It can haul up to 4,430 pounds and can tow up to 5,100 pounds, depending on the drivetrain choice as well as the van’s configuration.