The cargo van arena isn't one we usually cover here at Autobytel. This is mostly due to the fact that the cargo van market has been somewhat dormant for a number of years. Recently, however, the cargo van has seen a revitalization with automakers introducing new models. Case in point: the 2015 RAM ProMaster 1500 Cargo Van.

Much like the Dodge Sprinter van from the mid to late 2000's (which also happened to be a Mercedes-Benz Sprinter), the Ram ProMaster is a rebadged version of the Fiat Ducato van sold in Europe. What makes the ProMaster unique is its front-wheel drivetrain, a break from the standard rear-wheel drive configuration found on most cargo vans. That may seem a bit odd, but there's a reason for going front-wheel drive - namely, more area for cargo. The ProMaster 1500 Cargo Van can carry 259 cubic feet of cargo in the short wheelbase model, and 353 cubic feet for the long-wheelbase, high-roof model. Impressive numbers, to say the least.

But don't think Ram has forgotten the most important piece of the cargo van: the driver. Visibility is excellent all around with large windows and the availability of a backup camera. Comfort is also addressed with a number of adjustments for the seat and steering wheel designed to make the driver feel right at home. 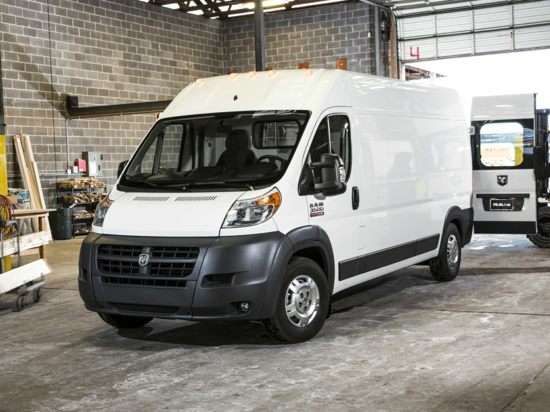