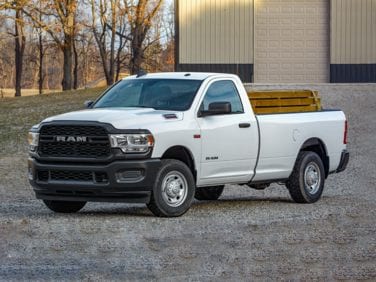 The RAM is a Chrysler Group family of pickup trucks that came about in 2009 as part of the Chrysler Group’s overall restructuring plan for better financial solvency. Before the RAM was split off into its own brand, RAM trucks fell under the Dodge brand. The Dodge RAM was an extensive and long-running family of pickup truck models, and the brand’s history lives on in the current vehicles, despite the change in naming. The Dodge RAM was introduced in 1981, and became recognized for being a strong competitor in the truck market, especially among the brands that call Detroit home. The RAM name came from the iconic hood ornament that had helped brand Dodge vehicles beginning in 1933. RAM trucks are built in Chrysler Group truck assembly facilities in Coahuila, Mexico and in Warren, Michigan, in the United States. The RAM 2500 model comes from the Coahuila plant.

The first trucks that carried the RAM name were known as the RAM and the Power RAM, but the brand gradually expanded based on the needs of the market, until it formed a comprehensive lineup of full-size pickup trucks. The Dodge RAM has been marked by long development and design cycles between generations, so, over the course of the trucks’ lives, they’ve gone through only a few major revisions. The Dodge RAM 2500 was initially offered in both light duty and heavy duty ratings, but sales weren’t high enough to continue production of both offerings. The RAM lineup was redesigned in 1994, though most of the drivetrains remained. The Dodge RAM 2500 was marketed for two of its preferred engine options: an 8-liter V10 gasoline engine designed for superior towing capacity, and a 5.9-liter Cummins turbo diesel. Other engines were available, however. The second generation Dodge RAM 2500 featured a 6-foot box and a quad cab. The third generation Dodge RAM was phased in over 2002 and 2003. The RAM 2500 was delayed until 2003 in part because it was slated to receive a new Hemi 5.7-liter engine that had been delayed. A new Cummins 6.7-liter turbo diesel engine became available in 2007 to replace the discontinued 5.9-liter unit. From the 2009 model year on, there has been a focus on making the RAM 2500 more competitive in the market than it was under the Dodge brand.

The fourth generation of the Dodge RAM had just been introduced at the 2008 North American International Auto Show as a 2009 model when, less than a year later, the brand change was announced. Chrysler had already added several new features to the RAM to differentiate the new generation, such as a new Hemi drivetrain option, a new suspension, a new four-door cab option, and a storage system incorporated into the truck’s bed, which was called the Rambox. The Rambox was later tied into the remote keyless entry system for better security. The RAM 2500, like the whole RAM lineup, is also known for retaining its manual transmission options even though the domestic pickup competition has phased them out. The RAM 2500 has also kept the mega cab option as an available configuration, in addition to the regular cab and quad cab offerings. For the 2014 model year, the RAM 2500 and 3500 trucks got an air suspension option, and electronic stability control became a standard feature.