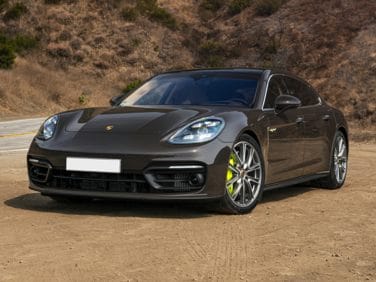 All About Porsche Panamera e-Hybrid

As if building a four-door sedan with a Porsche badge on it wasn’t enough to send the traditionalist Porsche aficionados screaming and tearing at their hair, the product team at Porsche came up with the Porsche Panamera S E-Hybrid. The good news is high performance is definitely part and parcel of the proposition. In other words, don’t be fooled by the “hybrid’ part of the vehicle’s nomenclature.

This is a true Porsche in every sense.

A parallel plug-in hybrid, the Panamera S E-Hybrid can be propelled by its 333-horsepower supercharged 3.0-liter V6, its 95-horsepower electric motor, or a combination of the two. Total system output is a healthy 416 horsepower and 435 ft-lbs of torque.

Further, because it employs a parallel hybrid configuration, the Panamera S E-Hybrid can travel at speeds of up to 83 miles per hour on electric power alone for a distance of approximately 15 miles. An eight-speed automatic transmission and rear-wheel drive complete the drivetrain.

The E-Power mode allows the Panamera hybrid to drive around the city as an electric car, without the gasoline engine firing—as long as battery power is sufficient. Speaking of which, the Porsche’s lithium-ion battery pack stores 9.4 kWh of electricity and can be recharged by brake energy recovery (regeneration), engine power, or from a 240v AC outlet. Plugging the car into the electrical grid will recharge the battery pack in about 2.5 hours.

The E-Charge mode recharges the battery pack while the car is operating under the propulsion generated by the gasoline engine. This permits you to charge the battery pack to is maximum on the highway. Then, when you enter a city, you can operate on E-Power alone.

The Sport mode uses the electric motor to supplement the output of the gasoline engine to improve acceleration. In other words, the Sport mode extracts the full performance potential from the powertrain as opposed to the maximum fuel economy. This way, Porsche’s engineering team can get the best of both worlds. It can use the hybrid system to extract the best gas mileage, or when the need arises, it can use the hybrid system to generate outstanding performance. The Porsche Panamera S E-Hybrid is capable of accelerating from zero to 60 in 5.2 seconds and has a published top speed of 167 miles per hour.