The Porsche Boxster is a compact two-seat roadster that provides open air thrills and excellent handling to go with its attractive styling and upscale list of features.  The Porsche Boxster additionally serves as the most affordable entry point into the German automaker's sports car lineup.  Not only is the Boxster quick but it is also safe thanks to the inclusion of forward airbags, side airbags and a rollover safety system to complement its electronic stability and traction control.

The Porsche Boxster's base model (MSRP $49,500) offers a CD player, leather-trimmed seats, air conditioning, a power top, Bluetooth connectivity, and 17-inch wheels.  It also comes with a 2.9-liter, six-cylinder engine that develops 255 horsepower and 214 lb-ft of torque and is good for fuel efficiency numbers of 20-mpg city and 29-mpg highway.  Larger 18-inch wheels come standard with the Boxster S (MSRP $60,900), in addition to a 3.4-liter, six-cylinder engine that is rated at 310 horses and 266 lb-ft of twist.  Fuel mileage for the more robust version of the Boxster matches that of the entry-level edition of the car, and both engines can be shifted via either a six-speed manual or a seven-speed dual-clutch automated manual transmission.

Options packages for the Porsche roadster are plentiful, starting with the Convenience package's adaptive HID headlights, automatic climate control and automatic wipers.  The Sport Chrono package is designed for track use and includes a launch control feature (when paired with the vehicle's automatic transmission), a lap timer, and a number of driver settings designed to help eek out a higher standard of performance from the car.  The Infotainment package installs a navigation system and a surround sound audio system manufactured by Bose.  Individual options for the Boxster include an adaptive suspension system, a limited-slip rear differential, heated and ventilated sport seats, and parking sensors. 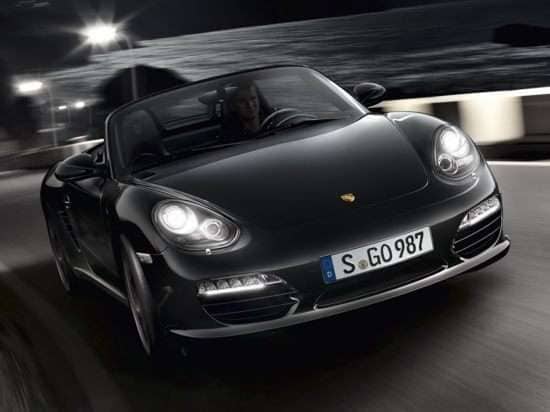