The Porsche 911 is one of the biggest names in the premium sport coupe and convertible universe, and the simplicity of its styling, the variety of its configurations, and the high end performance that it delivers have made it a favorite amongst thousands of well-heeled fans.  The Porsche 911 doesn't skimp on the safety gear either, offering standard features such as electronic stability control, traction control, forward airbags, seat-mounted front side airbags and side curtain airbags.  Certain models also come with knee airbags for those riding in the first two positions.

Two generations of Porsche 911 are currently on sale.  The Porsche 911 Carrera (MSRP $82,100) leads off for the new group of 911s, and it comes with dual automatic climate control, 19-inch wheels, power leather seats, a touchscreen multimedia and vehicle interface, a navigation system, Bluetooth connectivity, and a CD player.  The Porsche 911 Carrera S (MSRP $96,400) adds an active suspension system, 20-inch rims, and bigger brakes.  Both the Carrera and the Carrera S are available in convertible Cabriolet editions, priced at MSRPs of $93,700 and $108,000, respectively.

Under the hood of the Porsche 911 Carrera and Carrera Cabriolet sits a 3.4-liter, six-cylinder unit that puts out 350 horsepower and 287 lb-ft of torque.  Fuel mileage for this motor is rated at 20-mpg in city driving and 28-mpg on the highway.  The Carrera S benefits from the installation of a 3.8-liter mill that provides 400 horses and 328 lb-ft of torque while dropping fuel mileage by a single mile per gallon during highway cruising.  A seven-speed manual transmission is standard, while a seven-speed dual clutch automatic unit can be ordered as an option.

The remainder of the Porsche 911 lineup hails from the previous generation.  The Carrera 4 (MSRP $85,400), offers a similar level of equipment compared to the newer Carrera but adds all-wheel drive.  The same can be said for the Carrera 4S (MSRP $98,300).  In addition to being built on a different platform, these models also feature unique drivetrains.  The Carrera 4 offers a 345 horsepower, 3.6-liter six-cylinder engine that is good for 288 lb-ft of torque, while the Carrera 4S comes with a 3.8-liter, six-cylinder motor that produces 385 ponies and 310 lb-ft of twist.  Fuel mileage for the two is extremely close, with the Carrera 4's 18-mpg city and 26-mpg highway carrying the day.  The Porsches 911 Targa 4 (MSRP $93,500) and Targa 4S (MSRP $106,400) match the drivetrains of the 4 and 4S models but add a glass roof and hatchback to the equation.

The Porsche 911 Turbo (MSRP $137,500) ups the ante considerably with a twin-turbocharged 3.8-liter, six-cylinder motor that is good for 500 horsepower and up to 516 lb-ft of torque, while the Turbo S (MSRP $160,700) adds an additional 30 horses.  These monster Porsches feature all-wheel drive, surround sound audio, a stiff sport suspension, extended leather trim and an aggressive aero body kit.  Turbo Cabriolet (MSRP $149,000) and Turbo S Cabriolet (MSRP $172,100) editions of the 911 are also available, and fuel economy for turbocharged editions of the car is rated at 17-mpg in stop and go driving and 25-mpg on the highway.  All previous-generation 911s can be had with either a six-speed manual or seven-speed dual-clutch automated manual transmission. 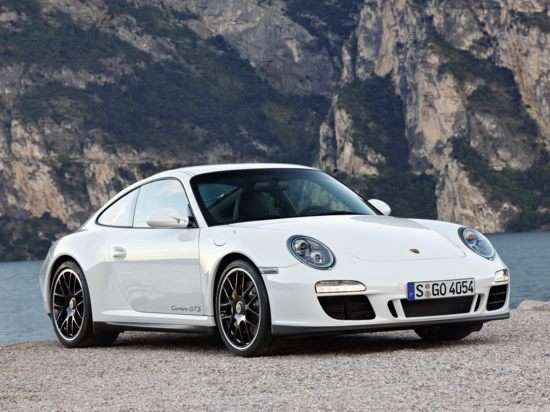