Two cars in one

Pontiac Vibe -- Review: Let’s say that like so many residents of the United States, your heart tells you to buy an American car to support both your country and your neighbors, but your head tells you to buy a Japanese car for long-term reliability and proven resale value. To simplify matters, as many of us do, let’s further state that brand is the defining characteristic of an American or a Japanese car. Ignore, like most of us, the fact that many Japanese-branded vehicles are domestic, not imported, products in the eyes of the federal government; that many Japanese brands benefit from significant investment and/or control by American companies; and that Japanese automakers have invested heavily in manufacturing plants in the United States while The Big Three have shipped assembly to Canada, Mexico, and sometimes off the continent. Really, who cares how much the economy in states like Ohio, Kentucky, Tennessee, and Alabama have benefited from companies such as Honda, Toyota, Nissan, and Hyundai, while several Michigan cities rot thanks to the closure of numerous General Motors plants

What matters to you is the badge on the back. If it’s a blue square with the letters G and M in the middle, you know (or think you know) that your hard-earned dollars are lining executive pockets in Detroit rather than Toyko, and for some reason that helps you to sleep better at night. But knowing Mr. Goodwrench on a first-name basis equally disturbs your slumber, and losing half of what you just paid for your new ride the instant you drive it off the lot is not regarded as sound financial practice in even the most remedial business classes of our nation’s community colleges. Wouldn’t it be supercalifragilisticexpialidocious if there were a car on the market with an American badge, Japanese engineering, and a healthy dose of useful utility to boot?

Check out the 2005 Pontiac Vibe. Under the Vibe’s skin reside engineering, powertrains, components, and design from Toyota, and real live American laborers in a GM/Toyota joint-venture plant located in California perform assembly. Plus, there’s room for four adults, a handy cargo area, and when fully loaded with equipment the sticker amounts to less than the average price for a new car sold in the U.S. This is why we strongly recommend a Pontiac Vibe if a dependable crossover thingamabob is exactly what you need.

Three models are at your service: Base, AWD, and GT. All come equipped with a 1.8-liter inline four-cylinder engine with variable valve timing, but the GT’s engine makes additional power thanks to increased intake and exhaust valve lift that activates when the motor is beaten to within an inch of its life. After a week in a 2005 Pontiac Vibe GT with the 170-horsepower engine, we think most folks will prefer the 130-horsepower base unit instead, which makes its peak power at lower rpms, generates almost the same amount of torque, runs on regular unleaded rather than premium, and is far more tractable for city driving.

One caveat to this recommendation: the AWD model adds 200 pounds to the Vibe’s curb weight while simultaneously making about five-percent less horsepower and torque. Plus, there’s no manual transmission to make the most of the power; the Vibe AWD is automatic-only. For this model, we strongly suggest consideration of the optional dealer-installed supercharger that bumps output by 30 percent and torque by 18 percent. 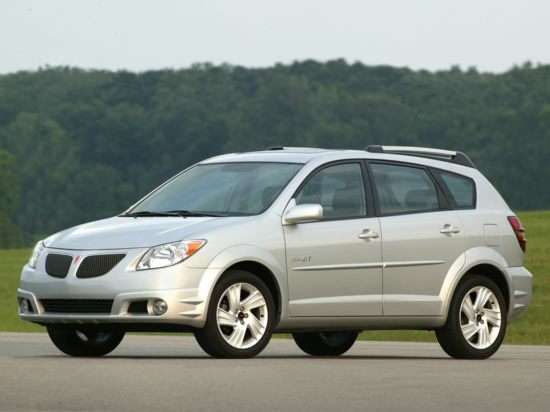