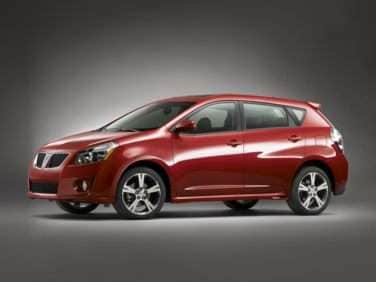 All About Pontiac Vibe

The Pontiac Vibe is a compact crossover that originally debuted in the 2003 model. The vehicle has been through two generational evolutions. The most recent generation was introduced for the 2009 model year. The Vibe competes with other small crossovers and hatchbacks, such as the Toyota Matrix, Honda Fit and Nissan Versa. In the Japanese auto market, the Vibe is known as the Toyota Voltz.

The Pontiac Vibe is a joint venture between GM and Toyota. The crossover shares the same E-platform as the Toyota Matrix and Toyota Corolla and is assembled in Fremont, California. The 2nd generation of the Vibe received a complete facelift that includes a wide, muscular stance, short overhangs and an overall sporty appearance. This new design helps to further differentiate the Vibe from the Toyota Matrix, which also received a redesign for the 2009 model year. Dimensions on the base Pontiac Vibe include a length of 172.1 inches, width of 69.4 inches and height of 60.9 inches.

On the inside, the Vibe is filled with high-quality components that are largely sourced from Toyota. The tall roofline and roomy interior allow for up to five passengers to ride comfortably.

A base engine upgrade package is available and features a 2.4-liter 4-cylinder engine that outputs 158 horsepower and 162 lb-ft. of torque. A fold-flat passenger seat is also included in the package. An AWD version of the base model is available as well, and includes all-wheel drive, air conditioning, roof rack and 4-speed automatic transmission.

All Pontiac Vibe models come standard with dual front airbags, front side airbags, side curtain airbags, antiskid system, antilock brakes and daytime running lights. Fog lights are available as optional equipment on the Base 2.4-liter engine model. The Vibe received good crash test results from the NHTSA, earning a perfect 5-stars in driver front impact, passenger front impact and driver side impact categories. In all other categories the crossover received a 4-star rating.

Fuel efficiency for the Pontiac Vibe is impressive. EPA estimated mileage for each vehicle model is as follows:

The 2009 Pontiac Vibe has been largely redesigned since the 2008 model year. The 2009 Pontiac Vibe has three trim levels, the base model, the AWD and the GT trims. Every Vibe model now has MacPherson front suspensions struts and the GT and AWD trim levels now have independent multi-link rear suspension standard. The base Vibe is equipped with a torsion-beam setup. There is now an electric power steering system that has made the vehicle more fuel efficient. Each new Vibe also has electronic stability control standard as well as anti-lock, four-wheel disc brakes.

A new safety feature on the Vibe is side thorax air bags that are standard in the front seats. The rear occupants are covered by head-curtain side air bags as well as active head restraints that provide protection against whiplash. There are new rubber strips that line the cargo floor to keep cargo from being moved around the vehicle. There are many new storage compartments around the vehicle, including some in the cargo area. The back seat has a 60/40 split and can fold down flat to make the cargo space larger. Vibe models that have a 2.4 liter engine now have a front passenger seat that folds down flat and a storage organizer in the rear cargo area that has tie-down hooks.

Outside, the front fascia has a slightly different look that makes the car look sportier. There are larger fog lamps, a bright exhaust tip and a roof spoiler. The AWD trim models have a roof rack standard. The base Vibe and the AWD trim each have four speakers, XM satellite radio and a CD player. An auxiliary input, audio controls on the steering wheel, MP3 compatibility and a seven-speaker Monsoon 320-watt sound system are optional on the base model and the AWD and standard on the GT trim.