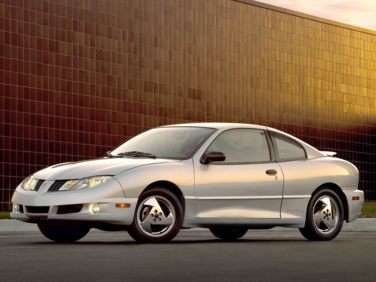 All About Pontiac Sunfire

The Pontiac Sunfire is a compact vehicle that originally debuted in 1995. After 10 years of production with relatively few design changes, the car was discontinued after the 2005 model year. The Sunfire was preceded by the Pontiac Sunbird and was replaced by the Pontiac G5. The vehicle competed directly with other low-cost compacts, including the Ford Focus, Kia Spectra and Hyundai Elantra.

The Sunfire's design and architecture borrowed significantly from another GM compact – the Chevrolet Cavalier. Both vehicles were built on the J-body platform. However, the Pontiac version of the car was outfitted with a slightly sportier design. Overall dimensions for the vehicle include a length of 182.0 inches, width of 68.4 inches and height of 53.0 inches.

When introduced in 1995, the Pontiac Sunfire was available as a coupe, sedan and convertible. The convertible version was dropped in 2001. The sedan model was eliminated in 2003.

Sedan and convertible models of the Pontiac Sunfire were available in one trim level – SE. From the 1999 model year and onward, the convertible's trim level was rebadged as a GT model.

The 2003 model year saw the discontinuation of both previous engines. A 2.4-liter 4-cylinder Ecotec engine became the sole option and delivered 140 horsepower and 150 lb-ft. of torque. This more fuel-efficient engine came standard with a 5-speed manual. A 4-speed automatic transmission was also available. EPA-estimated fuel efficiency for the 5-speed 2005 Sunfire was 26 mpg in the city and 36 mpg on the highway. The 4-speed automatic offered 24 mpg city and 34 mpg highway.