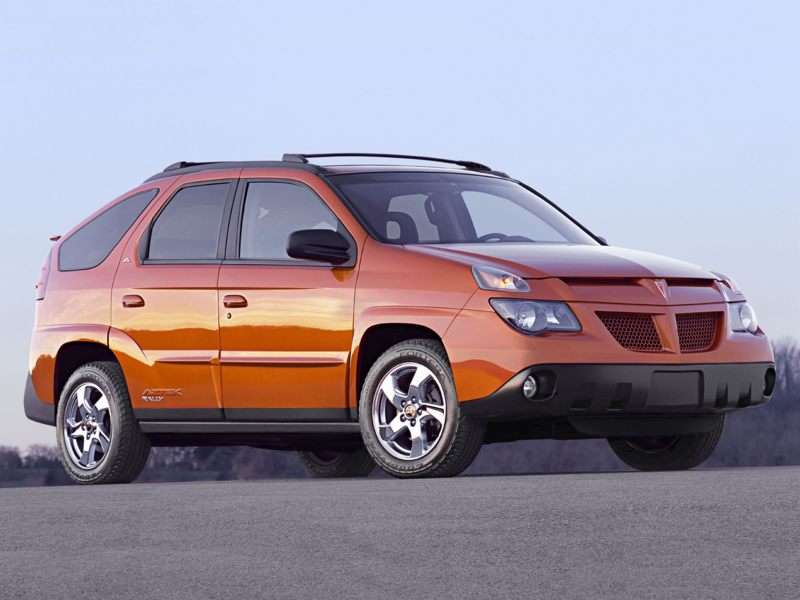 The orange vehicle depicted above is one reason that Pontiac no longer exists. That is the Aztek, a crossover SUV based on a concept vehicle that was actually sort of cool. To make that concept a production reality, though, required using a minivan platform, which forced design compromises, which in turn created the plasti-cladded monstrosity shown here. And, as you can see from Autobytel’s gallery of Pontiac pictures, it doesn’t look any better in yellow or green.

In many ways, the Aztek is a portrait of everything wrong at General Motors before it finally went bankrupt in 2009. Over the years, too many compromises designed to appease too many people ultimately produced too many vehicles that nobody wanted to buy. Conceptually, the Aztek was brilliant, right down to its optional camping tent. It totally fell apart in terms of execution.

At least it wasn’t a sporty version of some other GM model*. By 1999, when Autobytel began amassing its collection of Pontiac photos, most of the brand’s models were marketed as performance-oriented versions of a Chevy, if you define performance as the addition of exaggerated body styling and oversized fog lights. Remember, Pontiac sold excitement!

By the time GM declared bankruptcy and sacrificed Pontiac as a part of its restructuring, the brand had finally gotten its act together in terms of styling, as can be seen in some of our Pontiac images. The body cladding was gone. The buck-toothed fog lights were gone. The Aztek was gone. The names were now alphanumerics including G3, G5, G6, and G8.

But this just wasn’t enough to justify Pontiac’s continued existence in a post-bankruptcy GM, especially when the Buick brand was so critical to the automaker’s continued success and growth in China. As a result, GM kept Buick, and killed Pontiac.

* The Buick Rendezvous was essentially an Aztek under the skin, but was dramatically different in many ways, a rarity within the old GM.