Pontiac Grand Prix -- 2004 Review: What's better? A juicy, piping hot, made-to-order Double Double topped with crunchy iceberg lettuce and grilled onions, or a greasy Big Mac slathered in special sauce that's been sitting under the heat lamps for too long and sticks to the roof of your mouth when you chew?

Like the vast selection of fast-food burger joints in North America, the midsize sport sedan landscape is littered with choices; some tasty and some not. When spending between $20,000 and $30,000 on a fun-to-drive four-door that can carry two pairs of adults, contenders run the gamut from the raw and rorty Dodge Neon SRT-4 to the plush and spacious Nissan Maxima 3.5SL.

In an effort to lure consumers looking for a little bit of driving excitement to Pontiac showrooms in 2004, General Motors has ordered a substantial upgrade to the Grand Prix, the company's most popular entrant in the speedy family sedan segment. The previous version, which debuted in 1997, had gone seven years without significant modification, rendering it an also-ran in the heated competition for consumer consideration.

However, GM wished not to expend more capital than necessary to bring the GP up to snuff, so the company cribbed a play from the Toyota rulebook: the basic platform and powertrains of the old model were kept, structural reinforcements were added, a new skin was penned and a redesigned interior was installed. The changes are substantial enough to call the 2004 Pontiac Grand Prix new, but this is not a complete redesign. For 2004, the Grand Prix coupe has been shelved in favor of a sedan-only lineup.

Styling is familiar, if not quite as attractive as the outgoing Grand Prix. Pontiac's twin-nostril grille resides prominently at the front, oversized headlights sweep up and to the sides, and large, flared fog lamps anchor the corners of the wide front fascia. The roofline is positively rakish, giving the sleek Grand Prix sedan the look of a coupe. We never felt that the old car was cluttered with Pontiac's signature cladding, which was limited to lower door panel appliqués and rocker extensions. The new GP integrates Pontiac's traditional boy-racer design cues with more subtlety than on past Grand Ams and Bonnevilles, including ribbed taillights, bulging fog lights, better-integrated lower sill extensions and a blistered trunk lid to provide supposedly necessary “fast car” styling details.

Three versions of the 2004 Pontiac Grand Prix are available. The standard model is the GT1, the mid-level trim is GT2 and the hot-rod of the group is the supercharged GTP. Both the GT1 and the GT2 are equipped with GM's tried-and-true 3.8-liter “3800” V6 engine driving the front wheels through a four-speed automatic transmission. This motor makes 200 horsepower and 230 lb.-ft. of torque, adequate enough for the 3,477-pound Grand Prix GT1.

Selected standard equipment for the GT1 includes a four-wheel independent suspension, cruise control, power door locks, remote keyless entry, and a CD player. Step up to the GT2 and you can enjoy four-wheel-disc ABS, traction control, and a tire inflation monitor. Head curtain airbags are optional.

GTP models have a 260-horsepower, supercharged version of the standard 3.8-liter V6. With 20 more ponies on tap than last year's model, and a substantial 280 lb.-ft. of torque available, the GTP has been deemed worthy enough by Pontiac product planners to handle an optional Comp G package that includes 17-inch wheels, V-rated performance tires, StabiliTrak stability control and a TAPshift manually interactive transmission (TAP is an acronym for Touch Activated Power).

Equipped with a leather package, a power sunroof and XM satellite radio, our Galaxy Silver metallic 2004 Pontiac Grand Prix GTP test car ran $28,620 including the destination charge, pricing it in the upper echelon of a large and capable pack of similarly equipped sporting sedans. Notably, our GTP did not have the $1,395 Comp G equipment group that might have better helped it to live up to the marketing hype, but which also would have pushed it over the $30,000 barrier into entry-luxury sedan territory. 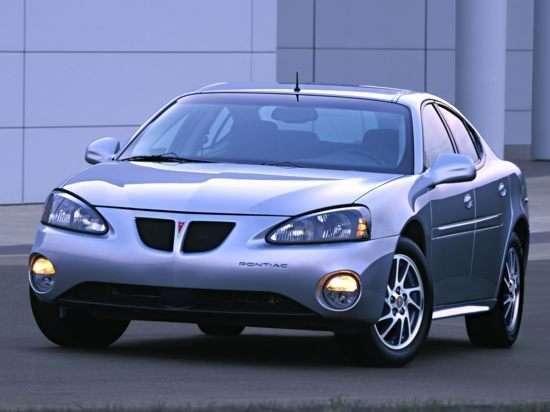