V. Eight. Power. You know you want it.

My pappy said "Son, you're going to drive me to drinkin'

If you don't stop drivin' that hot rod"…

OK, Pontiac doesn't rhyme, which is a shame because the new G8 GT is an old-fashioned hot rod at heart, but with modern suspension, brakes and features. The timing of bringing a high-performance, full-size sedan to the market is odd to be sure. With tighter fuel economy standards on the way and the specter of $4 per gallon gasoline just around the corner, the idea of big V-8 power is as much an anachronism as the "Hot Rod Lincoln." Crazy, you might say, but crazy like a fox. The G8 GT becomes the flagship sedan for Pontiac, a likely object of desire among urbanites looking for a bad "whip," the car an eighth-grader in Iowa plasters pictures of on his bedroom walls.

It also presents what could be the last chance many of us will have to own a V-8, if those predicting the death of performance cars are right. We all know that a lot of power can be wrung out of modern four- and six-cylinder engines, but the sound, the big grunt and the visceral experience isn't there. The G8 GT serves those up nicely and at a price within reach of mere mortals: The big V-8 is barking, but the price is whispering. Pontiac says they used the BMW 5 Series as a performance benchmark, and that's a lofty comparison. They didn't reach that for the whole car, but they got very close where it counts: acceleration, handling and braking. Sure the G8's interior isn't the nicest you can find, but who's going to be stroking the dash when they're mashing the pedal? Nobody.

So, just as the end of the horsepower war seems to loom, Pontiac serves up a bargain hot rod sedan.

Oh yeah, for you spoil-sports, there's a V-6 version with slightly better fuel economy and the same suspension. It's a nice car and fun to drive, but it's not the EIGHT.

The G8 is Pontiac's flagship sedan, replacing the discontinued Bonneville and the soon-to-be departing Grand Prix. From the time GM's top management gave the go-ahead to its introduction, the G8 was whipped up in one year. The car is based on the latest version of the Holden Commodore, a full-size, rear-drive sedan made by GM's Australian division, and both models of the G8 are built in Australia.

The Base Sedan starts at $27,595, including the $685 destination charge. Buyers of the base model can add the $795 Comfort and Sound package, which includes dual-zone air conditioning and a six-disc audio system with premium speakers. The $1,250 Premium Package adds leather seats, with heat and six-way power adjustment for the driver and front passenger, and a leather-wrapped shift knob. A sunroof is also available with either package for $900.

The GT starts at $29,995 with the $685 destination. Buyers of the GT can also add the Premium Package and the sunroof. The Sport Package adds 19-inch wheels, sport pedals and a leather-wrapped steering wheel for $600. For those needing all-season tires, those are a $150 option only available for the 18-inch wheels. 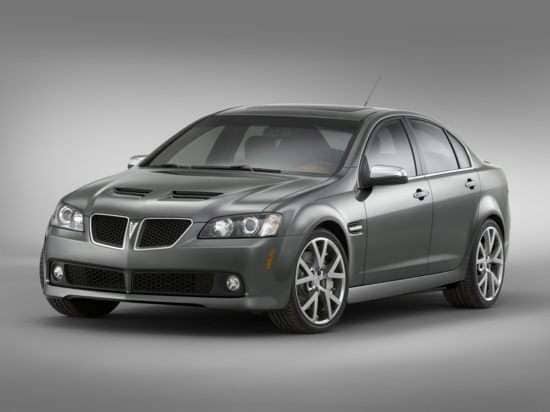