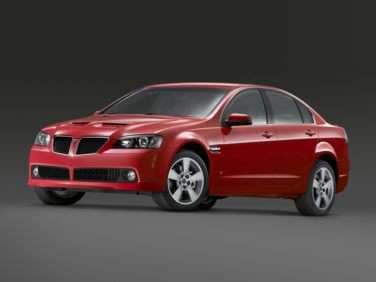 All About Pontiac G8

The Pontiac G8 is a full-size sedan that was initially released for the 2008 model year. The vehicle is intended to replace the Pontiac Grand Prix, although it is Pontiac's first rear-wheel driven large sedan since the Pontiac Bonneville and Pontiac Parisienne were discontinued after 1986. The G8 is designed to steal market share from class leaders such as the Dodge Charger, Toyota Avalon and Chrysler 300.

The G8's architecture comes from the GM Zeta platform, which is prominently used in their Australian Holden division. The design of the sedan is largely based on the Holden VE Commodore that debuted in 2006. International design choices can be found throughout the interior of the vehicle, including center-mounted window and mirror controls. High-quality parts and a roomy interior are intended to convey an upscale environment.

A 2010 Pontiac G8 ST is slated for future release and will feature a sport truck design reminiscent of the Chevrolet El Camino.

The base engine for the Pontiac G8 is a 3.6-liter DOHC V6 engine that includes variable valve timing and delivers 256 horsepower and 248 lb-ft. of torque. The GT model features a 6.0-liter V8 engine with Active Fuel Management that outputs 361 horsepower and 385 lb-ft. of torque. The base model comes matched with a 5-speed automatic transmission with manual shift capability. The GT upgrades to a 6-speed automatic and also features a limited-slip differential.

When the Pontiac G8 GXP is released in late 2008, the vehicle will feature a 6.2-liter V8 engine that boasts 402 horsepower. A 6-speed automatic transmission can be upgraded to a 6-speed manual. Other notable high-performance upgrades include track-tuned suspension, limited-slip differential and Brembo brakes.

The G8 comes standard with dual front airbags, front side airbags, side curtain airbags, antiskid system, brake assist, antilock 4-wheel disc brakes and daytime running lights. The Pontiac G8 has yet to be tested by both the IIHS and NHTSA.

The 2009 Pontiac G8 has very few changes since the 2008 model year. The car now has XM Satellite Radio as a standard feature on all models. During the later months of the 2009 G8, it will also have Bluetooth technology. There are four new exterior paint colors in 2009: Pacific Slate, Stryker Blue, Maverick Silver and Sport Red.

There is a new trim level in 2009, the G8 GXP. This trim level is a high-performance car that has a V8 engine and a sportier suspension. The GXP has manual transmission as an option. The FE3 suspension is stiffer on the G8 GXP. There is also a Brembo braking system included as standard that has 14-inch front discs and 12.8-inch discs in the rear. The rear brakes have rear pistons while the front discs have four-piston calipers. The GXP also has 19-inch wheels made from polished aluminum and 245/40R19 performance tires for the summer. There is all-season runner available as an option for no extra cost. The pedals are aluminum trimmed and the seats have sports styling that are upholstered with red and black leather.

The 2009 G8 has three trim levels: the base model, the GT and the GXP. The base G8 has 18-inch wheels made from alloy, power front seats that adjust four ways, a rear spoiler, an auxiliary audio jack, a CD sound system with seven speakers and a steering wheel that telescopes and tilts. The GT trim level comes standard with a 6.0 liter, V8 engine, a limited-slip rear differential, a steering wheel wrapped in leather, automatic climate control with dual zones and a Blaupunkt sound system with 11 speakers and a six-CD changer with MP3 capability. The GXP trim level has a V8 engine, an upgraded suspension system with sports tuning and a different fascia design.