Of the things GM is doing right, the G6 Convertible isn’t one of them

Introduction
By Thom Blackett
NORTH HOLLYWOOD, Calif. – Marketing may be the great plague of the 21st century. Everything you look at, from the Red Cross to the Holy Cross, depends on some sort of advertising to increase sales, enrollment, or as the case may be, blood donations. Just this past weekend, an especially sunny and warm one for the Memorial Day holiday, marketers were doing their evil deeds – skywriting planes butchered the brilliant blue backdrop over my city by spelling out the name of a website. Pretty soon they’ll figure out how to penetrate eyelids, literally leaving us without escape from the barrage of persuasive, subliminal messages and images.

OK, that’s feeding a bit too much from the paranoid spoon, but it’s true that marketing has its fingers in most aspects of daily life, making it difficult to distinguish hype versus reality, others’ impressions versus our own. Such was the case during a visit to GM’s Southern California design center last week, an outing dedicated to speeches by company executives, the unofficial unveiling of the V8-powered 2008 Buick LaCrosse Super, discussion about the upcoming Pontiac G5 coupe, and a test drive in the 2007 Pontiac G6 Convertible. It was the promise of a spin under the G6’s new retractable hard top that led us to spend two hours fighting traffic to reach the studio in North Hollywood.

That’s where we heard about GM’s devotion to Pontiac, one leg of a newly-created so-called brand channel, the result of which will be an increasing number of Pontiac, Buick, and GMC dealerships co-existing under one roof. In this scenario, GMC’s got trucks covered, Buick’s all over the elegant premium vehicles, and Pontiac will offer “seductive performance.” Hence, the G6 coupe, sedan, and now, hardtop convertible. When the entry-level G5 coupe is added later this year, company executives suggest these dealerships will have most anything buyers want, from inexpensive cars to heavy-duty trucks and luxurious SUVs (of course, buyers shopping on one of America’s many Boulevards of Cars could walk 100 feet north to the Toyota dealer or 100 feet south to the Ford dealer and get the same variety, but that’s beside the point).

That’s the hype part. The reality part is that at least one of the three props holding up this brand channel isn’t what GM's marketing folks would have you believe. The Pontiac G6, while perfectly fine in many respects, is not a performance car. Not in terms of its powertrain or its handling. True, a new engine pushing about 250 horsepower is coming, but a quick look around in the G6’s segment unearths several competing models with equal or greater power, and few trying to paint themselves as performance machines. To be worthy of such a description, a car needs not only a lively powertrain, but responsive steering and tightly controlled handling. The G6 lacks all of these traits.

Ah, but it has a retractable top, making it the least expensive hardtop convertible on the market. Well, that’s what Pontiac thought before it was announced that the 2007 Volkswagen Eos will start about $500 less. Maybe putting all of the time and energy that went into making the hardtop work properly would’ve been better spent developing a powertrain and handling package befitting a performance car. Company executives admit that there’s much work left to do, but suggest that progress is being made. After driving the G6 convertible, we’d say Pontiac needs to pick up the pace.

Moving up to the $29,990 GTP model avails buyers of a 227-horsepower 3.9-liter V6, automatic climate control, a power driver’s seat, XM satellite radio, dual chrome exhaust, and Stabilitrak stability control. For an extra charge the 2007 Pontiac G6 GTP Convertible can be outfitted with most of the items offered on the GT (not including power adjustable pedals) plus GTP-embossed leather seat upholstery.

What comes under the hood of a front-wheel-drive 2007 Pontiac G6 Convertible is entirely dependent on the exterior badge. If there are only two letters, GT, momentum comes from a 12-valve, 3.5-liter V6 featuring a cast iron block and aluminum heads; this base engine is rated at 201 horsepower at 5,800 rpm and 221 lb.-ft. of torque at 3,800 rpm while running on regular gas. A four-speed automatic with a manual-shift mode is the only transmission available. The EPA suggests that drivers will realize 19 mpg city and 27 mpg highway with this setup.

If, however, there’s a shiny GTP badge on the trunk, a bigger V6 is at work. In this case, it’s a 12-valve, 3.9-liter six-cylinder engine that also uses a cast iron block and aluminum heads but tosses variable-valve timing into the mix. The GTP packs a little more punch behind the accelerator, to the tune of 227 horsepower at 6,000 rpm and 235 lb.-ft. of torque at 3,000 rpm, again, courtesy of low-grade petrol. With a four-speed automatic pushing power to the front wheels, fuel economy is expected to reach 18 mpg in the city and 26 mpg on the highway.

Regardless of which trim is chosen, the respective engine is charged with moving about 3,800 pounds of mass, or roughly 400 pounds more than a comparable 2007 Pontiac G6 Coupe. A MacPherson strut suspension keeps the front end riding smooth while a multi-link setup takes care of the rear. Front and rear stabilizer bars, traction control, and stability control systems aim to benefit handling. Stopping the 18-inch alloy wheels wrapped in 225/50 tires is a set of four-wheel-disc antilock brakes, and a large steering wheel is connected to a rack-and-pinion assembly.

Design Compared to similar soft top convertibles, the 2007 Pontiac G6 Convertible’s interior is relatively quiet with the roof raised, the body feels strong, the silhouette resembles that of the G6 coupe, and operating the top is as simple as pushing a button.

Ask any auto executive with a hardtop convertible in the portfolio if the added engineering was worth it, and she’ll likely respond with praise for the car’s quiet interior, structural rigidity, coupe-like looks, and the retractable roof’s seamless operation. These are all positive points related to the 2007 Pontiac G6 Convertible. Compared to similar soft top convertibles, the G6’s interior is relatively quiet with the roof raised, only penetrated by some wind and road noise; the body feels strong, though there is some cowl shake with the top stowed; the handsome silhouette resembles that of the G6 coupe; and operating the top is as simple as pushing a button. Aside from the long delay in lowering (33 seconds) or raising (37 seconds) the top, living with a convertible doesn’t get any simpler. In terms of comfort, front passengers shouldn’t have any issues, though those who ride in back are subjected to an upright back rest, hard front seatbacks (though they are sculpted for a bit more leg room), only two cupholders for storage, and hard side panels lacking armrests. Anyone of average height or greater will hit their head against the rear glass when the top is raised. However, in the world of coupes and convertibles, many of these issues are fairly common.

What’s not so common is the retractable hard top, which in the G6’s case, eats up every bit of usable trunk space when lowered. Unlike the Volvo C70 that protects a small cubby, the Pontiac goes from 12.6 cubic feet with the top up to 2.2 cubic feet with the top down. One would be hard pressed to find enough space in there for an empty briefcase or a bachelor’s bag of groceries (a.k.a. a six-pack of Bud Light). Fortunately, the rear seat can be used for cargo when multiple passengers aren’t part of the equation.

Driving Impressions With its retractable hard top, the 2007 Pontiac G6 Convertible offers better visibility than its coupe counterpart and a fairly quiet ride. Look for an upcoming V6 and six-speed automatic to address performance.

Despite the fun-in-the-sun lifestyle afforded by convertible ownership, there are a few points that new owners suddenly find themselves dealing with – cowl shake and poor visibility. Cowl shake, best evidenced by a jittery windshield frame and most prevalent with the top down, is inherent to most convertibles, though stiffer modern-day rides suffer less from this malady. But the best option for keeping the structure tight is to offer a retractable hard top like that found on the 2007 Pontiac G6 Convertible. Push the overhead button for 33 seconds while the windows drop, the deck lid rises, and the multi-panel roof stacks and stows in the trunk. With the bright sun filling the G6’s cabin, head on down the road only to notice much less shake than exhibited by a traditional rag top, but more than a 2006 Volvo C70. Drivers’ eyes will be on the road, but front passengers will catch a glimpse of the dash shimmying back and forth, and all riders will feel a little vibration through the seat.

Otherwise, travel in the G6 Convertible is similar to that of the coupe version, with steering that offers little road feel and a dead spot on-center, a steering wheel too large to be sporty, and a competent yet average engine mated to an old-school four-speed automatic transmission. Handling, while perfectly acceptable for any mainstream family car, is too soft and relaxed to qualify for Pontiac executives’ “seductive performance” tagline. A particularly curvy stretch of mountain road demonstrated the G6 Convertible’s fancy for understeer and side-to-side weight transfer, though our 50-mile route also revealed responsive brakes. A new 250-horsepower V6 and six-speed automatic transmission combo is expected later in the year.

Driving with the top up, which requires 37 seconds of roof and window raising, is arguably better than in the G6 Coupe. Visibility is aided by relatively thin rear pillars, and because the side windows aren’t separated by a plastic B-pillar, over-the-shoulder visibility is excellent. However, the integrated rear headrests take away from the rear view, and the high beltline makes backing up a bit of a challenge. Interior noise is kept to a minimum on the highway, while the roof panels and interior panels pipe up when dodging potholes in the city.

What materials are used to construct the 2007 Pontiac G6 Convertible’s roof?
According to Pontiac, the entire assembly is built with steel and cast aluminum.

When will the 2007 Pontiac G6 Convertible be available?
Models started trickling in to dealers for retail sale in April 2006.

Will the 2007 Pontiac G6 Convertible be a high-volume car?
Pontiac expects to sell 12,000 – 15,000 G6 Convertibles per year, so it’s more than a limited-run, exclusive model, but not on par with the Honda Accords and Ford Tauruses of the world. 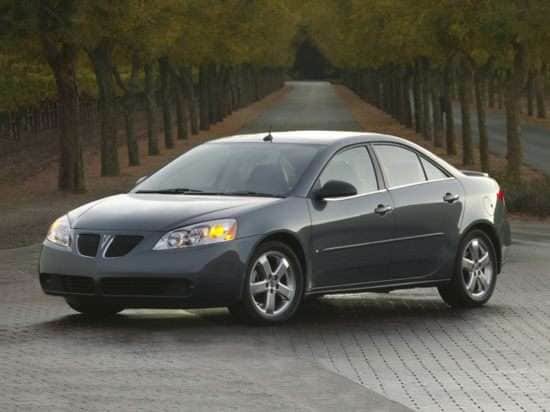