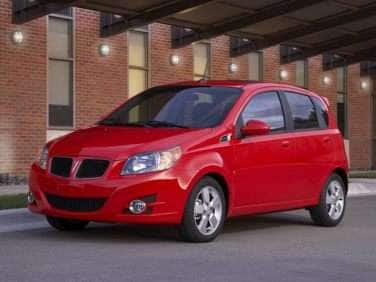 All About Pontiac G3

The latest addition to the Pontiac lineup is the subcompact hatchback, the 2009 G3. The Pontiac G3 is a subcompact hatchback produced by Daewoo, General Motors’ South Korean-based division. Although it is a rebadged version of the Chevrolet Aveo, which is available as both a sedan and a hatchback, the G3 is limited to just a hatchback configuration. Despite its small size, the G3 has a spacious interior that can accommodate even taller passengers thanks to its tall roofline. The sporty front fascia features Pontiac’s signature split grille and helps distinguish the G3 from the Aveo5. The 2009 Pontiac G3 goes on sale in March 2009 and slots in Pontiac’s lineup beneath the Pontiac Vibe. Vehicles that directly compete with the Pontiac G3 include the Honda Fit, Toyota Yaris and Hyundai Accent.

Other than Pontiac logos, a sportier instrument cluster is the only major difference between the Aveo5’s cabin and the G3’s. Instead of a single pod to house all gauges, the G3 offers three separate pods with a large speedometer mounted in the middle. Despite its small size, the G3 has a spacious interior that can accommodate even taller passengers thanks to its tall roofline. The unique theater-style seating optimizes passenger comfort and interior space. With the rear seat folded out of the way, the G3 holds a maximum 42 cubic feet of cargo.

The Pontiac G3 is equipped with a 1.6-liter DOHC inline-4 that puts out 106 horsepower and 106 lb-ft of torque. A five-speed manual transmission will be the base gearbox for the 2009 G3, while a four-speed automatic will be an available option. The addition of the G3 gives Pontiac its fourth vehicle with fuel economy estimates over 30 miles per gallon. With the automatic transmission, the G3 gets fuel economy estimates of 25 mpg in the city, while the manual increases fuel economy to 27 mpg. On the highway, both transmissions yield 34 mpg for the G3 making it second only to the G5 XFE coupe in Pontiac’s lineup.

The 2009 Pontiac G3 is a new subcompact vehicle in the U.S. car market, but it has been marketed in Canada under the name Pontiac Wave and in other markets as the Chevrolet Aveo. Most reviewers of the Pontiac G3 have considered it a new version of the Aveo that has been given a new name under the Pontiac badge. There are only two changes between the 2008 Aveo and the 2009 G3. The changes are small cosmetic tweaks to the exterior of the vehicle- the front end and the rear ends of the vehicle are redesigned. The grille has upturned ends that form a smile shape that gives the G3 a different look than many similar vehicles.

The Pontiac G3 has a 1.6 liter engine with inline four that has 106 horsepower and produces 105 foot pounds of torque. The G3 has both a four-speed automatic transmission and a five-speed manual transmission available. The G3 is only be available as a four-door hatchback in the U.S. initially, but the hatchback sedan that has been available in Canada for years will be sold in the U.S. market later in the 2009 model year.

The G3 comes with 14-inch wheels, air conditioning, frontal and side-impact airbags with dual stages in the front seat, an auxiliary jack, single-zone air-conditioning, a rear spoiler, fog lamps, six speakers, a CD/MP3 audio system and a year’s subscription to the Safe and Sound package from OnStar standard. Options for the G3 include front side airbags, ABS and four-wheel antilock brakes that use a disc on the front wheels and a drum on the rear wheels. With the sport package, the G3 comes with 15-inch wheels that have five spokes and are painted aluminum. For extra cargo room in the back, the rear seats of the G3 fold down.