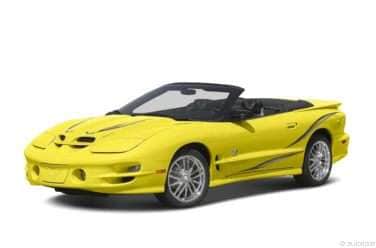 All About Pontiac Firebird

The Pontiac Firebird is a muscle car that debuted for the 1967 model year. The vehicle was originally a platform clone of another GM vehicle – the Chevrolet Camaro. After four generations of body design, the car was discontinued following the 2002 model year. In its last years, the Firebird competed directly with vehicles such as the Acura RSX, Ford Mustang and Toyota Celica.

The 4th-generation Pontiac Firebird was introduced for the 1993 model year. The design was virtually all-new, but retained a sleek, aerodynamic exterior. The Firebird's famous pop-up headlights also remained. A minor facelift in 1998 upgraded the front-end of the vehicle. Final dimensions for the vehicle include a length of 193.3 inches, width of 74.4 inches and 51.8 inches (51.2 inches on the coupe).

Inside, the Firebird is filled with plastic details and a straightforward, stylish design. The low roof and high doorsill resulted in a cramped feeling for many passengers. The rear seat, with 35.2 inches of headroom and 28.8 inches of maximum legroom, was small even for a muscle car. Total cargo room for the Firebird was 33.7 inches (12.9 inches for the convertible).

When unveiled in 1993, the Pontiac Firebird was available in a base, Formula and Trans Am trim. A convertible body style was introduced for the 1994 model year. At the end of its lifespan, the base Firebird came standard with air conditioning, cruise control, power steering, full power accessories, stereo system with CD player, rear defogger, automatic headlights, fog lights, rear spoiler and 16-inch alloy wheels.

1997 saw the release of a Firehawk LT4 model that was developed by SLP Performance Parts. The vehicle featured performance upgrades that delivered 330 horsepower and 340 lb-ft. of torque. A yellow Collector's Edition Trans Am model was also released in 2002 to mark the vehicle's final year of production.