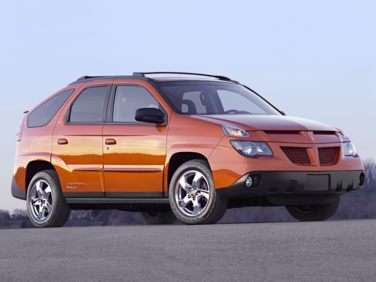 All About Pontiac Aztek

The Pontiac Aztek was the first crossover SUV manufactured by GM. The vehicle was introduced for the 2001 model year and discontinued for the 2005 model year. The vehicle competed directly with competitor vehicles such as the Ford Freestyle, Toyota 4Runner and Nissan Murano.

The unique design of the Pontiac Aztek was loosely based on the Pontiac Montana minivan. Both vehicles were built on the GM U-body platform, which has also been used for the Buick Rendezvous, Chevrolet Venture, Chevrolet Uplander, Oldsmobile Silhouette and Saturn Relay.

With a tall hatchback design, the vehicle was intended to appeal to young outdoor sport enthusiasts. However, many drivers found the vehicle's design off-putting. The Daily Telegraph named the Pontiac Aztek the ugliest car in the world in an August 2008 article.

Overall dimensions for the Aztek include a length of 182.2 inches, width of 73.6 inches and height of 66.9 inches. Front and rear headroom measured in at 39.7 inches and 39.1 inches, respectively. The Aztek accommodates up to five passengers. Total cargo volume for the vehicle is a healthy 95.1 cubic feet.

The Pontiac Aztek was only available with on engine option – a 3.4-liter V6 that delivered 185 horsepower and 210 lb-ft. of torque. A 4-speed automatic transmission came standard and delivered 19 mpg in the city and 26 mpg on the highway. Four-wheel drive was available as an optional upgrade. A Trailer package added performance features such as a heavy-duty engine-oil cooler and alternator, load-leveling rear suspension and a tire inflation kit.

The Pontiac Aztek failed to garner the sales expected by GM. In the vehicle's first year of sales, just 27,322 units were sold out of a production of 75,000. A majority of the surplus was sold to rental company fleets. Unappealing design has been listed as the major deterrent to sales. However, a base MSRP above $20,000 has also been suggested as too high for the young target market the Aztek was intended to attract. In 2006, GM introduced the more traditionally styled Pontiac Torrent as the Aztek's replacement.