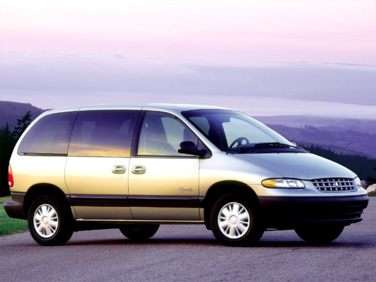 All About Plymouth Voyager

The Plymouth Voyager’s claim to fame is being the corporate stable mate of the world’s first minivan, the Dodge Caravan. While mechanically identical to the Dodge, the Voyager was traditionally offered with just a little more standard equipment than the Caravan in order to help introduce some individuality to the brand. Over the ensuing years, the Plymouth Voyager evolved away from the K-car platform that it had initially been built on and added a more modern chassis, as well as the longer-wheelbase Grand Voyager model.

The 2000 Plymouth Voyager is still tied to the upgraded design that was introduced for the 1996 model year. The van now has a more aerodynamic, almost jelly-bean-like appearance that sets it apart from some of the more angular options on the market. A sliding rear door mounted on each side of the vehicle also helps to give it extra utility when it comes to loading kids or cargo.

There are 4 different engine options for the Voyager. A 2.4 liter, 4-cylinder engine that generates 150 horsepower is standard in the entry level van. A 3.0 liter, 150 horsepower V6, sourced from Mitsubishi is available as a dubious upgrade, along with a 158 horsepower 3.3 liter V6 and a much better 180 horsepower 3.8 liter V6. Each of these V6’s comes with a 4-speed automatic transmission, while the 4-cylinder makes do with a 3-speed auto.

The Voyager can be ordered in only two different trim levels, depending on the level of comfort and features that buyers are looking for. The base Voyager is relatively austere, but not uncomfortable, with cloth seating for seven and air conditioning. Upgrading to the SE adds in power windows and door locks and opens up access to equipment packages that can see the installation of a DVD entertainment system, trip computer, buckets seats for the second row and power front seats. In general, the interior of the Voyager has more than enough room for everyone, although the third row is best left to two passengers, not three. Each row of seating can be removed in order to free up significant cargo space.

Driving the Plymouth Voyager is not a chore. The vehicle’s suspension is stiff enough to handle the extra weight of the van and still provide a ride that is more akin to a family sedan than a tall, top-heavy vehicle. While taking corners at speed can still sometimes result in body lean and tire chirping, the Voyager never feels unsafe. In terms of power delivery, the larger V6 engines are much better at motivating the van’s considerable bulk.

For the price, the Plymouth Voyager provides an excellent budget-conscious compromise between the luxury-conscious Chrysler Town & Country and the Dodge Caravan. With similar powertrains and interior features, it really almost comes down to a matter of personal preference when trying to decide between these three minivans. Unfortunately, at the end of the 2000 model year Plymouth ended production of all vehicles and ceased to exist as an automotive brand, with the Voyager being renamed the Chrysler Voyager for 2001.