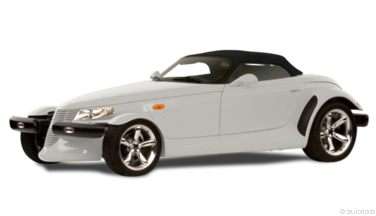 All About Plymouth Prowler

Occasionally, a vehicle goes on sale which defies easy categorization. Chrysler spent the early part of the 90’s attempting to define their corporate personality. A significant amount of resources were spent creating concept cars that investigated not only new markets, but also new production methods that could save the company time and money. The Plymouth Prowler was the direct result of these experimentations. Designed to be like no other car on the road, the Prowler gave Plymouth a halo car to help distinguish it from the other divisions of the company.

The 2001 Plymouth Prowler is a beast apart when it comes to exterior styling and overall concept. The vehicle most closely resembles the roadsters popular amongst hot-rodders in the 1940’s and 50’s. The most stunning aspect of the Prowler’s appearance are the open front wheels, which extend out from the narrow hood of the car and are barely covered by the thinnest of fenders. The vehicle’s rear haunches are wide, with the triangular front end spreading out to fan into the vehicle’s trunk and rear deck. The Prowler’s narrow headlights are built into either side of the aggressive front end, giving the vehicle an evil look.

Underneath the hood of the Prowler sits a 253 horsepower, 3.5 liter engine. The vehicle’s 4-speed automatic transmission, which can be manually shifted, is positioned above the rear wheels to help the vehicle maintain a better weight balance. Lightweight materials are used throughout the vehicle in order to help the Prowler make the most of its average powertrain. With a weight of under 3,000 lbs, the Prowler can hit 60 miles per hour from a standing start in 5.7 seconds – not exactly a rocket, but quick enough to be fun in the hands of an experienced driver. The vehicle’s suspension is stiff and tuned for performance, not a plush ride, which can make the car feel rough over bumpy roads. However, running the Prowler at speed on a track or winding country lane quickly brings out some of the more positive aspects of this rigid geometry and chassis.

The vehicle’s unique styling continues in the cockpit. The gauges are located in the center of the dash, mounted in a recessed oval pod that uses the same type of painted plastic veneer as the PT Cruiser. A tachometer is attached to the top of the steering column. The heating and stereo controls, however, look like they could have come from any Chrysler sedan. Seating is comfortable, and dual padded roll bars are provided to help keep occupants safe in the event of an accident.

The Plymouth Prowler has often been criticized for not backing up its macho looks with an equally powerful engine. However, comments in this vein miss the point of the vehicle entirely. The Prowler, while not designed to take on all comers in a sports car battle royale, is one of the most unique and fun cars every built. It attracts an incredible amount of attention and compliments wherever it goes, and for many drivers, that is all they need in a car of this type. The Plymouth Prowler was replaced by the Chrysler Prowler for the 2002 model year.