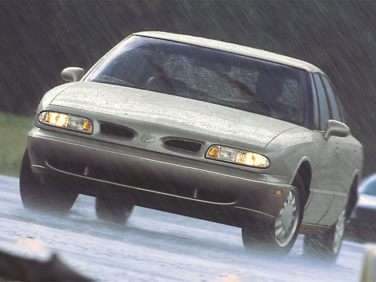 All About Oldsmobile Eighty-Eight

The vast majority of automobile shoppers start their quest on the internet. Discover all there is to know about Oldsmobile Eighty-Eight vehicles. An authoritative site like Autobytel contains lots of info. For every vehicle manufactured in the past decade there is plethora of detailed material. Get an intelligent synopsis of the Oldsmobile Eighty-Eight. View the standard equipment that comes on the base vehicle which can include interior, exterior, performance, security, and convenience features. There is a list of technical specifications that includes data on fuel economy, power output, weight, and the interior and exterior dimensions. Maybe the most important thing you should do before you buy a Oldsmobile Eighty-Eight is to use the vehicle configurator to see how much each available option will affect the MSRP price. Its easy to scrutinize an automobile at Autobytel. See how the Oldsmobile Eighty-Eight vehicle fairs against its opposition. At Autobytel.com you can view multiple vehicles side by side. Another great resource available to the shopper is crash test data from both the IIHS and the NHTSA; these ratings are very important as a vehicle with a good safety rating could one day save your life.

Autobytel has a huge assortment of car images available online for free. Not only are there Oldsmobile Eighty-Eight vehicle pictures of the outside; but there are pics of the seats, sound system, navigation, motor, and any other cool features. These photos are the best way to get a good representation for the look of the automobile. When you finally do make a trip to the auto sales lot to buy a Oldsmobile Eighty-Eight there will not be some aspect you will be unaware of. Another great feature at the Autobytel site is the section containing car reviews. Read reviews for Oldsmobile Eighty-Eight autos from everyday consumers. There is also analysis from experts in the car field.