NEW YORK, NY - When Nissan debuted the original Xterra, the philosophy was to provide a basic SUV priced low enough that active Gen-Xers could afford it and styled ruggedly enough to convey strength and capability. Launched with an advertising tagline that proclaimed the Nissan Xterra to be "everything you need and nothing you don't," the SUV was a hit. But in truth, the Xterra did deliver a few things that buyers didn't need, or want: a rough truck-like ride, a cramped interior, and an anemic base engine. For the redesigned 2005 Nissan Xterra, the lessons this resurgent Japanese automaker has learned - there's nothing ailing a car company today that great product cannot cure - add up to significant refinements without distilling the rough-and-tumble character of the original.

Under the 2005 Nissan Xterra's hood is a 4.0-liter V6 engine, mated to a choice of a six-speed manual or five-speed automatic transmission driving the rear or all four wheels. Rated by Nissan to generate 250-plus horsepower and 270-plus lb.-ft. of torque, the new engine is an increased displacement version of Nissan's 3.5-liter VQ engine found in the 350Z, Maxima and Altima. The redesigned 2005 Nissan Frontier and 2005 Nissan Pathfinder also use this 4.0-liter V6.

Based on Nissan's new F-Alpha platform, the architecture providing the foundation for all of Nissan's trucks in 2005, the new Xterra's fully boxed frame is stiffer than before and the wheelbase is stretched two inches, providing benefits in terms of ride and handling. An independent double wishbone front suspension is combined with a tough rigid leaf spring rear suspension, and the Xterra Off-Road model includes high-performance gas-charged shocks for serious boulder bashing. Also enhancing the Xterra's four-wheeling prowess is a reduced approach angle and greater ground clearance. Engine speed sensing rack-and-pinion steering replaces the previous Xterra's recirculating ball unit to provide improved responsiveness.Four-wheel-disc antilock brakes include electronic braking distribution (EBD) and brake assist (BA). Wheels on the Off-Road and SE trim levels can range up to 17 inches in diameter with 265/65 tires. An enhanced off-road traction control system is available on the 2005 Nissan Xterra, along with Vehicle Dynamic Control (VDC - a stability control system).

The interior of the 2005 Nissan Xterra is completely redesigned, with the same ideal of easy-use functionality as the original but with more room, improved materials and what looks to be more intuitive controls. Front legroom has been increased nearly an inch and front headroom over half an inch. The real gain, however, is in the second row, where legroom has increased 3.6 inches and headroom has grown by 2.3 inches. Stadium-style seating and a stepped roofline remain from the original Xterra, but versatility and convenience has been improved, with a larger center console and a glove compartment that is now a double deck design. The front passenger seat can also fold in half to carry long items with the tailgate closed.

In the cargo area, the Xterra boasts new conveniences, such as a channel lock system of adjustable cargo tie downs, a bin designed to hold one-gallon jugs of liquid, and a hidden storage area under a false cargo floor. As before, a first-aid kit is optional. Safety add-ons include available supplemental front-seat side-impact airbags and roof-mounted supplemental curtain airbags for side impact and rollover protection for all outboard passengers.It's fair to say that the 2005 Nissan Xterra is a completely different vehicle, yet it has stayed stubbornly true to the design philosophy of the first Xterra. Styling is completely different, but we'd bet most people would need to take a hard look to see the changes. The front end is shared with the new Frontier and Pathfinder, butched up for the rugged Xterra. Larger fender flares, integrated rear bumper side steps to ease access to the roof rack, and a taller and wider stance are further evidence of the redesign. But at first glance, just one thing is clear - this is a Nissan Xterra.

All told, the 2005 Nissan Xterra - due at dealerships in early 2005 - is still the kind of vehicle you can get muddy, but now can carry a family in high-riding style on a nice clean road. 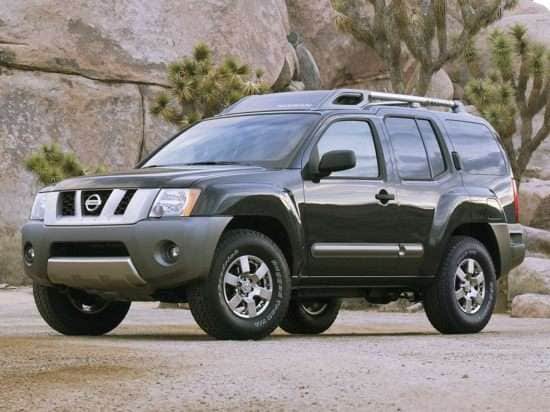