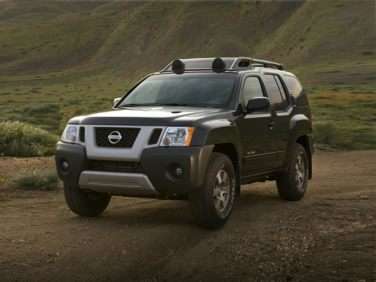 All About Nissan Xterra

Named after a series of off-road triathlon races known as XTERRA, the Nissan Xterra is a compact SUV that debuted for the 2000 model year. The vehicle is currently in its second generation of body design, which was introduced for the 2005 model year. In Iran the Xterra is known as the Nissan Roniz. In China it is known as the Nissan Paladin. American market SUVs that directly compete with the Xterra include the Toyota Highlander, Jeep Liberty and Honda Element.

The Nissan Xterra features a rugged design that is intended to appeal to adventure-seeking drivers. An angled V-strut grille and imposing roof rack are notable examples of the deliberately muscular design. The SUV is built on the same Nissan F-Alpha platform that is used for the Nissan Titan, Nissan Pathfinder, Nissan Armada and Infiniti QX56. The current generation of the Xterra is larger than the previous version, with a total length of 178.3 inches, width of 72.8 inches and height of 74.9 inches.

Under the hood, the Xterra features a 4.0-liter DOHC V6 engine that delivers 261 horsepower at 5,600 rpm and 281 lb-ft. of torque at 4,000 rpm. A 6-speed manual transmission and 5-speed automatic transmission are both available. Rear traction control comes standard on all models. An all-wheel drive package can be added that includes additional performance features such as a 2-speed transfer case and front traction control. The Off-Road trim also adds a locking rear differential, hill ascent control and hill descent control.

All Nissan Xterra models come complete with dual front airbags, antilock 4-wheel disc brakes, antiskid system and front seat active head restraints. Side curtain airbags are available as an optional upgrade. In government crash tests, the Xterra earned a mixed bag of safety ratings. The NHTSA awarded a perfect 5-star rating in the categories of driver and passenger side impact. Four stars were awarded in front impact categories and three stars were handed down for 4WD rollover and rollover resistance.

The 2009 Nissan Xterra has several changes to the exterior that result in a car that looks subtly different from the outside. The interior of the Xterra is also getting a new look. The Xterra has a front fascia that is different and has a new design for the center stack. The vehicle also comes with side curtain airbags standard this model year. The interior design has been changed by brand new upholstery for every mode in 2009. The SE trim level now comes standard with leather upholstery. The Xterra Off-Road vehicles now have roof-mounted lights standard. There are also a few new designs for the wheels of Xterra and there are two new exterior paint colors, Red Brick and Navy Blue, available in 2009.

A new technology package is also included in all new Xterra models. The package will be included in all models for free for the first part of the model year but later it will be available for a fee. The technology package offers features such as an auxiliary jack, audio controls on the steering wheel, satellite radio and Rockford Fosgate sound. The Rockford Fosgate system is a sound system that includes XM radio, an iPod jack, audio controls mounted on the steering wheel and Bluetooth.

There are four Xterra trim levels available in 2009, including the S, X, SE and Off-Road. The Off-Road trim is available only as a four-wheel drive. Every Xterra has a 4.0 liter, V6 engine with 261 horsepower and 281 pounds of torque. It can tow up to 5,000 pounds. There are two types of transmissions available- a five-speed automatic and a six-speed manual transmission. The Xterra has standard features like air-conditioning, front seatbelt pretensioners, stability control, bucket seats, four-wheel anti-lock disc brakes, dual-stage supplemental air bags in the front and traction control.