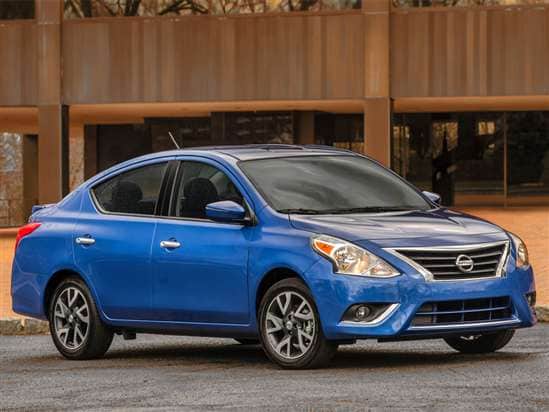 Changes for the 2015 Nissan Versa Sedan:

The 2015 Nissan Versa Sedan is an entry-level car equipped with a large interior and trunk, and is sold in S, S Plus, SV, and SL trim levels. Air conditioning, Bluetooth, a tilt steering wheel, and a trip computer are standard in each of them, and the S Plus upgrades the car with cruise control, extra speakers, and a continuously variable transmission (CVT).

Every version of the Versa Sedan is equipped with a 109-horsepower, 1.6-liter 4-cylinder engine. A choice between a 5-speed manual gearbox and a 4-speed automatic transmission is offered for the S version of the car. The S Plus, SV, and SL models include a standard CVT.

Regardless of the transmission selection, the Versa S Sedan is rated to get 30 mpg in combined driving, according to the EPA. Upgrade to a trim level with the CVT, and the Versa Sedan gets 35 mpg.

As this summary is written, neither the NHTSA nor the Insurance Institute for Highway Safety (IIHS) has published official crash-test ratings for the 2015 Versa Sedan.

Last year, this car earned a 4-star overall rating from the NHTSA, the result of mediocre 3-star ratings for the front passenger in a frontal-impact crash and for the driver in a side-impact crash. In tests conducted by the IIHS, the Versa Sedan received the top rating of Good in all assessments except the small overlap frontal-impact test, in which it earned the lowest rating of Poor for driver protection.

Given its status as an entry-level car, the Nissan Versa Sedan isn’t a technological tour de force. However, the SL trim level includes NissanConnect with Mobile Apps technology, which includes a 5-inch touchscreen display, Bluetooth audio streaming, and text messaging capability. It can be upgraded with a larger screen, a navigation system, voice recognition capability, and a reversing camera.

Bluetooth hands-free calling is standard on all versions except the base S model, and the SL model includes Nissan Intelligent Key with push-button starting as standard equipment.