World’s Strongest Man Pulls a Dozen of Them

A curb weight of just over 2,400 lbs. is an important advantage for the 2014 Nissan Versa Note, since its rather svelte proportions help it achieve EPA marks of up to 31 mpg city/40 mpg highway/35 mpg combined. But more to the point, at least for today, is the fact that the Note's notably lightweight approach to driving also made it the ideal choice for setting a new Guiness World Record: Just ask Zydrunas Savickas, aka "the World's Strongest Man."

Savickas and Guiness representatives recently gathered in Duskininkai, Lithuania, where a crowd of onlookers watched the strongman haul 12 Notes, weighing in excess of 28,000 lbs., for a distance of more than five meters. The feat added yet another honor to Savickas' resume, which actually features five "World’s Strongest Man" championships, including the most recent one.

Said Savickas: "It is always great to set a new record. Once I got into my stride, pulling the 12 Nissan Notes was fine."

And while it's not setting world records here in the U.S., the 2014 Nissan Versa Note and Versa sedan have combined to lead the subcompact segment in both November and year-to-date sales, and by a wide margin. Last month, the 2014 Nissan Versa family posted 8,327 sales, while its next closest rival, the Chevy Sonic, just topped 4,700 deliveries. Through November, the Versa duo has been responsible for 108,488 sales, providing a cushion of more than 25,000 sales between it and the Sonic.

Both the 2014 Nissan Versa Note and Nissan Versa Sedan—the least expensive new car in America—are on sale now with MSRPs starting at $13,990 and $11,990, respectively. 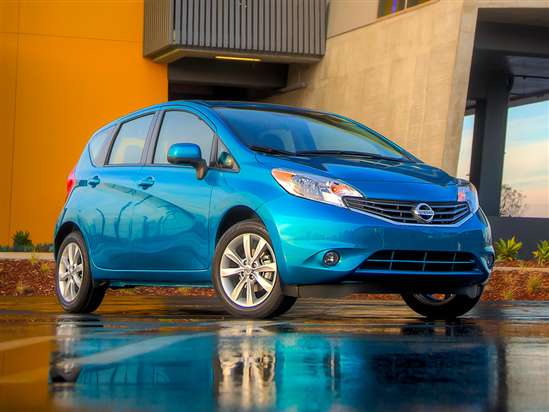