In the cutthroat world of the American full-size truck market, the Nissan Titan flies under the radar. Although it’s the most powerful and most capable pickup truck Nissan has ever created, it’s often overlooked by buyers, with sales that consistently lag behind its rivals. Nissan, however, remains committed to its loyalists and continues to improve its largest pickup. The 2020 Nissan Titan is updated substantially and packs the power, comfort, and capability full-size truck buyers demand.

Built in Canton, Mississippi, the Titan was last redesigned back in 2016, but Nissan has just spent over $200 million to give the half-ton pickup a long list of improvements, including more power, a larger infotainment touchscreen, a revised interior, and revamped styling. The new 2020 Nissan Titan is now better-equipped than ever to take on its rivals in the full-size truck class, where it competes with the RAM 1500, Chevrolet Silverado, GMC Sierra, Toyota Tundra, and of course the Ford F Series, which is America’s best-selling truck.

Fewer Body Styles Than Before

Fewer Body Styles Than Before

For the 2020 model year, Nissan has slimmed down the Titan’s list of available body styles. The two-door single cab is no longer offered. Buyers can choose between the King Cab, which has suicide-style rear doors and a 6.5-foot bed, and the popular Crew Cab with four forward-opening doors, a larger backseat, and a 5.5-foot bed. Because the 2020 Nissan Titan won’t reach dealers until early next year, pricing hasn’t been announced yet, but we know both body styles will be available with either two-wheel drive or four-wheel drive.

Although the Nissan’s base prices have been traditionally higher than others in the segment, its pricing has been competitive overall when you consider that every Titan comes with a big 5.6-liter V8 engine, which is the most powerful standard engine in the class. The King Cab models will remain the least expensive, while both body styles will be available in five trim levels: S, SV, SL, Platinum Reserve, and Pro-4X. The Platinum Reserve brings the most luxury while the Pro-4X serves off-road enthusiasts with all-terrain tires, Bilstein shocks, a locking rear differential, skid plates, and hill-descent control.

For buyers looking for more towing and payload capability, Nissan still offers the Titan XD, which is now only offered in the Crew Cab body style. The XD isn’t quite as large and capable as 2500-series trucks from Ford, Chevy, GMC, and Ram, but uses a stronger heavy-duty frame than the half-ton Titan, along with beefier differentials. At 151.6 inches, its wheelbase is also about 20 inches longer. These and other changes increase the trucks towing and payload capacities.

This year, Nissan has also discontinued the availability of the XD’s Cummins 5.0-liter V8 turbodiesel engine. Now every Titan XD is powered by the same 5.6-liter V8 as the standard Titan. With the standard V8, the XD can tow a traditional trailer that weighs up to 10,880 lbs, and a fifth-wheel trailer weighing 11,000 lbs. These numbers beat most half-tons on the market, but they fall way behind the capability of the true heavy-duty American trucks. Like the standard Titan, the XD is also offered in S, SV, SL, Pro-4X, and Platinum Reserve trim levels.

More Power Than Before

More Power Than Before

Although the Titan’s 5.6-liter V8 has never been short on power, Nissan has cranked up its output this year, recalibrating the double overhead cam engine to optimize spark and fuel delivery on 91-octane premium fuel. The changes have increased its peak horsepower from 390 to 400 horsepower and driven its torque rating from 394 lb-ft to 413. However, if you fill the tank with less-expensive 87-octane gasoline, the engine’s output does slide back to last year's levels.

The Titan's big rumbly V8 is smooth and revs cleanly to 6,000 rpm redline. Nissan has also replaced the seven-speed automatic transmission with a well-geared nine-speed, and it has radically lowered its rear axle gear ratio from 2.93 to 3.69:1. Now the truck is quicker off the line and accelerates substantially better from 50 to 70 mph, which helps when towing up grades. The new transmission also does a better job of keeping the engine in its powerband, and it’s quick with a downshift on the highway when you need a burst of power to pass. It offers a Tow/Haul mode and can be shifted manually with well-placed buttons on its column-mounted shifter.

Perhaps the most significant improvement to the standard 2020 Nissan Titan is its new exterior styling. It’s a much better-looking truck than before. Nissan’s designers have replaced its grille, which now includes a large T in its design, and they’ve reshaped the truck’s headlamps and taillights into more attractive units. Nissan also says the low beams of the new handlamps are twice as powerful as before.

The front fenders are also new and feature a simpler shape. They’ve also lost their oddly-shaped large chrome badges, which looked awkward. S and SV models get a sporty monochromatic finish, while the SL lathers on the chrome. Platinum Reverse models get dark chrome trim and two-tone paint. Unfortunately, the Titan XD doesn’t benefit from all of the exterior changes. Its front fenders, for instance, are unchanged. And unlike the Ford F-150, which features an all-aluminum body and bed, Nissan still builds the Titan from heavier steel. Only its hood is aluminum. Nissan also hasn’t jumped into the configurable tailgate race. The design of Titan’s tailgate remains conventional. It’s one piece and features two positions, up and down.

The Titan’s ride and handling have always been impressive, and its suspension, steering, and brakes haven’t received any changes this year. It handles well for a 6000-pound truck and its steering is responsive. It also rides smoothly, even when its bed is empty. Its independent front suspension soaks up rough road admirably, despite our test truck’s 20-inch wheels and tires. Although it doesn’t ride quite as well as a RAM 1500, which uses a unique coil-spring rear suspension, the Titan is still one of the more comfortable trucks in this class.

When it comes to fuel economy, the old Titan's seven-speed automatic transmission was holding it back a bit, as most other trucks in the class now feature transmissions with eight- or even 10-speed gearboxes. The fuel efficiency ratings of the 2020 Titan with its new nine-speed automatic haven’t been finalized yet. Nissan says official fuel economy estimates of 15 mpg city and 21 mpg highway may not improve, but that owners should see more miles per gallon in the real world.

Buyers will also be impressed with the Nissan’s overall refinement and comfort. Nissan has added an acoustic windshield to quiet down its interior. Wind noise is now quite hushed even at 80 mph. Our loaded SL Crew Cab 4X4 test truck featured heated and cooled front seats, heated rear seats, a heated steering wheel, dual-zone automatic climate controls, and premium leather.

Although its seats are a bit flat, they proved to be very comfortable during a full day of driving, and the driver’s seat is height-adjustable. There’s also a tilting and telescopic steering wheel, making it easier to find the right driving position. There’s also an abundance of interior storage, including large cupholders, a massive center console bin with clever smartphone holders, and large door bins with provisions for water bottles. The rear seats fold up easily for additional cargo space.

The 2020 Nissan Titan also gets an improved infotainment system. The standard touchscreen has grown from 7 inches to 8, and a 9-inch screen is now standard on the upper trim levels. It’s a huge improvement, and Nissan says the 8-inch is the largest standard screen in the class. The system's functions have also been updated for easier use, and its graphics are far better than before. Apple CarPlay and Android Auto are standard, and our test truck was equipped with the available Fender premium sound system, which sounds fantastic.

Other systems are offered for the first time, including Nissan's Intelligent Forward Collision Warning and Intelligent Cruise Control. We especially like the 360-degree monitor, which gives you a bird’s-eye view of the truck at low speeds. When combined with the available front and rear parking sensors, slipping this big rig into a tight parking space is much easier.

With its significant updates, the 2020 Nissan Titan offers impressive capability, high comfort, and unique features. Although we still prefer the Ram’s better-detailed cabin, the Titan’s new interior design no longer lags behind the Ford’s and it’s a step ahead of Chevy’s, GMC’s, and Toyota’s.

The Titan is also one of the quicker trucks in the category, and its new transmission has improved its fuel economy, driving characteristics, and towing performance. Plus, it looks better than before, offers impressive ride comfort, secure handling, and the most standard horsepower and the best warranty in the class. If you’re in the market for a powerful V8 full-size pickup, the Nissan Titan remains a solid choice. 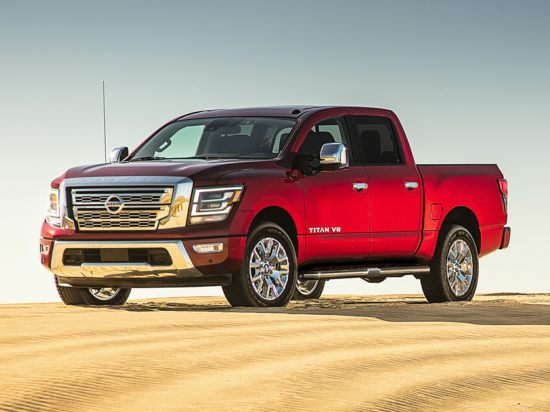