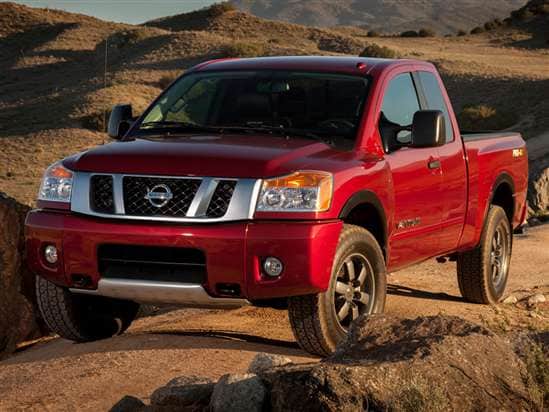 Changes for the 2014 Nissan Titan:

As Nissan readies its next-generation Titan pickup truck, one that will offer an optional Cummins turbo-diesel 5.0-liter V-8 engine, the automaker makes no changes to the 2014 Titan.

The 2014 Titan is sold in King Cab and Crew Cab styles with 2-wheel or 4-wheel drive. King Cabs are offered in S, SV, and PRO-4X trim levels. In addition to these versions, the Titan Crew Cab is available with SL trim, and the Crew Cab SV variant can be optioned with an 87-inch long cargo bed in place of the standard-size bed.

The Titan PRO-4X is based on the SV model, adding 4WD, performance shocks, skid plates, an electronic locking rear-differential, and unique gray 18-inch wheels wearing all-terrain tires. Styling details separate the PRO-4X from the rest of the Titan lineup.

Among full-size pickup trucks, the Nissan Titan is one of the least powerful, and is also the least fuel-efficient model in its class. According to the EPA, the Titan is rated to get between 12 mpg in the city and 18 mpg on the highway, for combined fuel economy ratings of 18 mpg for the 2WD model and 17 mpg for the 4WD version.

According to the National Highway Traffic Safety Administration (NHTSA), the 2014 Nissan Titan earns a 4-star rollover resistance rating with 2WD, and a 3-star rating with 4WD. The NHTSA has not assessed the Titan’s crashworthiness.

In crash tests performed by the Insurance Institute for Highway Safety (IIHS), the Titan earned a “Good” rating for its moderate overlap frontal-impact and rear-impact injury prevention capabilities, and an “Acceptable” rating for its roof crush strength. As this summary is written, the IIHS has not assessed the Titan’s performance in the side-impact test or the new small overlap frontal-impact test.

NissanConnect, a connectivity and infotainment system operated using a 5.8-inch color touchscreen embedded in the truck’s dashboard, is optional for the Titan. The system includes a navigation system, a USB port, and Bluetooth hands-free calling, music streaming, and text-messaging capabilities. Additionally, the Titan is offered with rear parking assist sensors, a reversing camera, and a rear-seat DVD entertainment system.