The Nissan Titan is a full-size pickup that can be had in both King Cab and Crew Cab models, each of which can seat up to six occupants thanks to an extended passenger compartment and the installation of an extra set of access points just behind the front doors. King Cab trucks feature rear-hinged half-doors while Crew Cab Titans offer four full-size doors. The Nissan Titan can also be equipped with either a five-foot, seven-inch or a seven-foot, three-inch cargo beds (Crew Cab), or a six-foot, six-inch bed (King Cab), The truck's towing capacity maxes out at a hefty 9,500 lbs.

All Nissan Titan pickups feature the same engine under the hood, a 5.6-liter V-8 that churns out 317 horsepower and 385 lb-ft of torque. A five-speed automatic transmission is included free of charge, and fuel economy for the full-size truck shows as 13-mpg city and 17-mpg highway.

As with most modern pickup trucks the Nissan Titan can be customized to within an inch of its life in the form of options and packages. Standouts from the available equipment list include the SV Value Truck package (parking sensors, front bucket seats, Bluetooth), the SV Premium Utility package (Value Truck contents plus power adjustable pedals, bedliner, lockable in-bed storage, louder stereo) and the PRO-4X Premium Utility package that dresses up the off-roader with much of the above-listed equipment. The PRO-4X and SL can also be outfitted with a navigation system, a sunroof and a DVD player for rear seat occupants via the Technology package. 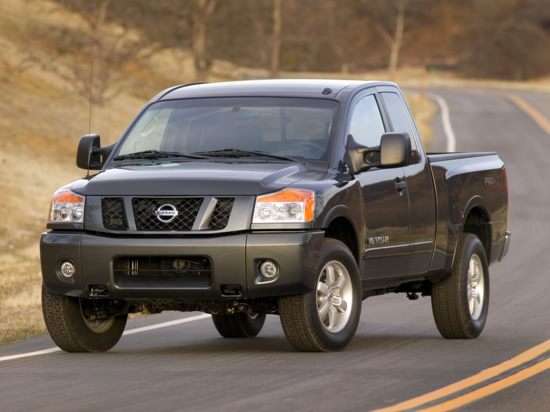