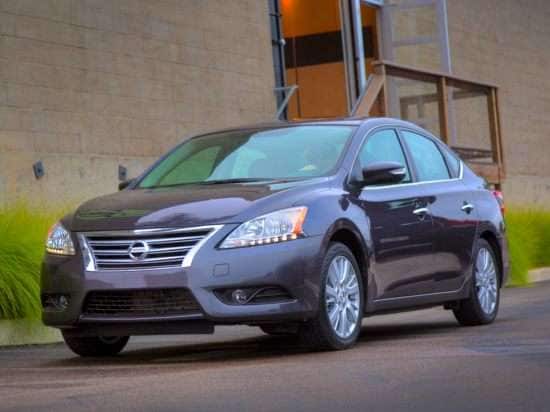 Pretty much everything is new in the 2013 Nissan Sentra, which was completely redesigned for the current model year with a new engine, Nissan’s next-gen continuously variable transmission (CVT), fresh interior and exterior design cues, and a full range of modern-day infotainment and connectivity technologies.

The automaker’s latest Xtronic CVT is a key addition to the standard features of the 2013 Nissan Sentra SV, and it’s paired with cruise control, too. The SV model also welcomes an upholstery upgrade, to premium cloth, along with steering-wheel-mounted controls and a six-speaker sound system.

At the peak of the 2013 Nissan Sentra range is the SL model. Here, owners will enjoy a cabin decked out with premium cloth seating, a leather-wrapped steering wheel and shift knob, maple wood-tone trim, a dual-zone climate system with rear-seat heat ducts, and the six-speaker audio system with USB port and 90-day complimentary subscription to SiriusXM Satellite Radio. Distinguishing the exterior of the 2013 Nissan Sentra SL are its auto-dimming headlights and power-adjustable and heated outside mirrors (with integrated LED turn signals).

The 2013 Nissan Sentra relies on a 1.8-liter 4-cylinder engine with continuously variable valve timing and outputs of 130 hp and 128 lb.-ft. of torque. A traditional six-speed manual transmission is standard on the 2013 Nissan Sentra S; all other models feature the new Xtronic CVT.

The 2013 Nissan Sentra received an overall safety grade of 4 stars from the National Highway Traffic Safety Administration, reflecting marks of 4 stars in front and rollover crash protection and a 5-star performance in side crash testing. As of this date (May 31, 2013), the Insurance Institute for Highway Safety has not yet evaluated the 2013 Nissan Sentra for its Top Safety Pick program.

Chief among the tech toys offered in the 2013 Nissan Sentra are Bluetooth for hands-free calling and the NissanConnect infotainment and connectivity system, which is offered in a Navigation Package that showcases: