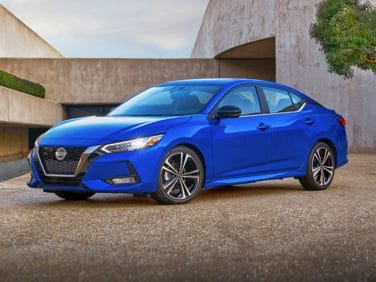 All About Nissan Sentra

The Nissan Sentra is a 4-door sedan that has been a staple model in Nissan's vehicle lineup since the 1982 model year. The mid-size car is currently in its sixth generation of body design, which debuted for the 2007 model year. In Japan, the Sentra is known as the Nissan Sunny. Competitor vehicles that directly compete with the Nissan Sentra include the Ford Focus, Mazda MAZDA3 and Honda Civic.

The current Nissan Sentra borrows much of its design from the larger Nissan Altima and Nissan Maxima. The modern, athletic styling includes a forward-leaning stance and a sloping hood. Overall dimensions for the vehicle include a length of 179.8 inches, width of 70.5 inches and height of 59.5 inches. The sedan is built on Nissan's C Platform, which is also used for the Nissan Rogue.

The interior cabin of the Sentra is larger than most competitors in its class. Up to five passengers are accommodated by the front and rear seats, with rear headroom and legroom coming in at 37.3 inches and 34.5 inches, respectively. In the front, the dashboard continues the modern aesthetic of the exterior, with textured details and quality materials throughout. Maximum cargo space for the Sentra is 13.1 cubic feet. A 60/40 split rear seat is helpful for hauling larger items.

All model trims up to the SL feature a 2.0-liter DOHC 4-cylinder engine that delivers 140 horsepower and 147 lb-ft. of torque. The engine can be mated with either a 6-speed manual transmission or automatic continuously variable transmission. The manual delivers EPA-estimated fuel efficiency of 24 mpg in the city and 31 mpg on the highway. The CVT improves performance to 25 mpg city and 33 mpg highway.

The Nissan Sentra SE-R is a high-performance version of the Sentra. Performance upgrades include a sport suspension, rear spoiler and 17-inch all-season tires. The SE-R also features an upgraded 2.5-liter DOHC 4-cylinder engine that outputs 177 horsepower and 172 lb-ft. of torque. A modified version of the SE-R engine can be found on the SE-R Spec V, which improves performance to 200 horsepower and 180 lb-ft. of torque. The SE-R also adds a performance suspension and summer tires. A limited-slip differential powertrain is available as an upgrade.

The 2009 Nissan Sentra has had very few changes for the current model year. There are a few extra 12-volt outlets located in the 2009 models than the 2008s. There is also a CD system that is new for this year, including the capability for playing MP3s. Also new are automatic door locks that work with a speed sensor and a new design for the trunk lid. The cosmetic change to the 2009 is the addition of two new colors, beige and charcoal, that have been added to the choices for interior trim and seat colors.

The 2009 Sentra has five trim levels available. The base model is the 2.0 and the higher levels are the 2.0 s, the 2.0 SL, the SE-R and the SE-R Spec V. The trims named with 2.0 have a 2.0 liter, four cylinder engine with 140 horsepower. The 2.0 and 2.0 SL trim levels have a continuously variable automatic transmission system standard while this is an option on the 2.0 S. The 2.0 S has a six-speed manual transmission system standard. The SE-R and Spec V trim levels has a 2.5 liter four-cylinder engines. The engine in the SE-R has 177 horsepower and a continuously variable automatic transmission while the engine in the Spec V trim level has 200 horsepower and a six-speed manual transmission.