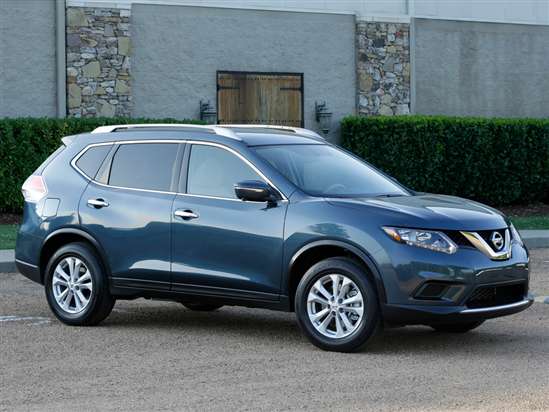 Changes for the 2015 Nissan Rogue:

One year after a complete redesign, the 2015 Rogue gains a new Eco driving mode, and the SV Premium Package contains new heated cloth seats. Arctic Blue Metallic is a new paint color for 2015.

The 2015 Nissan Rogue is offered in S, SV, and SL flavors. Alternatively, buyers can choose the Rogue Select model, which is a carry-over version of the first-generation Rogue wearing a lower price tag.

Every 2015 Nissan Rogue is equipped with a 2.5-liter 4-cylinder engine making 170 horsepower. A continuously variable transmission (CVT) is the only one available, and it delivers the power to the crossover’s front wheels. An all-wheel-drive system is optional.

According to the EPA, a 2015 Nissan Rogue is expected to get 28 mpg in combined driving, even with the optional AWD system.

While the Rogue receives a “Top Safety Pick” rating thanks to top-ranked results in all crash-test assessments conducted by the Insurance Institute for Highway Safety (IIHS), this compact crossover SUV’s performance in NHTSA crash tests is unimpressive.

As this summary was written, the NHTSA had not carried the 2014 Rogue’s ratings forward for the 2015 model year. That means it is possible that the federal agency might re-test the SUV to see if it can improve in terms of frontal-impact protection.

All Rogues are equipped with LED running lights, Bluetooth connectivity including music streaming and a text-messaging assistant, a reversing camera, and a touchscreen audio system with a 5-inch display screen.

Upgrade to the SV model for Nissan Intelligent Key with push-button engine starting, smart automatic headlights that are linked to the windshield wipers, and NissanConnect Mobile Apps technology. Options include a navigation system with voice recognition technology and a 7-inch display screen, a blind spot warning system, a lane departure warning system, a rear moving object detection system, and a 360-degree monitoring system.

Rogue SL models include navigation and the 360-degree monitoring system, and in addition to the safety features listed above can be optioned with a forward collision warning system and LED headlights.