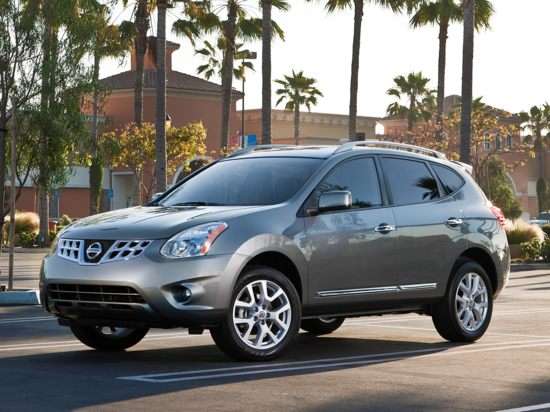 Changes for the 2013 Nissan Rogue:

To this a Rogue SV adds passive entry with push-button starting, upgraded fabric for the seats, a power driver’s seat, and a front passenger’s seat that folds in half to make it easier to carry long items. Larger aluminum wheels, upgraded exterior trim, and roof rails are also included on this model. The SV Premium Package adds automatic headlights, automatic climate control, a power sunroof, a navigation system, and a better sound system.

Next on the roster is the Rogue SV with the SL Package. Leather, heated front seats, heated side mirrors, a 360-degree AroundView Monitor, xenon headlights, and 18-inch aluminum wheels are included with this upgrade.

A 2.5-liter 4-cylinder engine is standard in every 2013 Rogue. It delivers 170 horsepower, sent to the SUV’s front wheels through a continuously variable transmission (CVT). An all-wheel-drive system is optional.

According to the EPA, the 2013 Rogue is expected to return 23 mpg in the city and 28 mpg on the highway, for a combined rating of 25 mpg. With all-wheel drive, each number drops by a single digit.

According to the National Highway Traffic Safety Administration (NHTSA), the 2013 Rogue receives a 4-star overall crash-test rating. Note, however, that front passenger protection in a frontal-impact collision rates just 3 stars.

In crash tests conducted by the Insurance Institute for Highway Safety (IIHS), the Rogue is rated “Marginal” in the tough new small overlap frontal-impact test, which is designed to replicate a collision on the vehicle’s front left corner with an oncoming vehicle or a tree or pole. In other tests, the Rogue receives a “Good” rating for protection except for roof crush strength, for which it gets an “Acceptable” rating.

The only version of the Rogue that does not include a standard reversing camera is the base S model. Choose the Rogue SV with the SL option package upgrade to enjoy the benefits of a 360-degree AroundView monitoring system, a rarity in a vehicle without a luxury brand affixed to it.