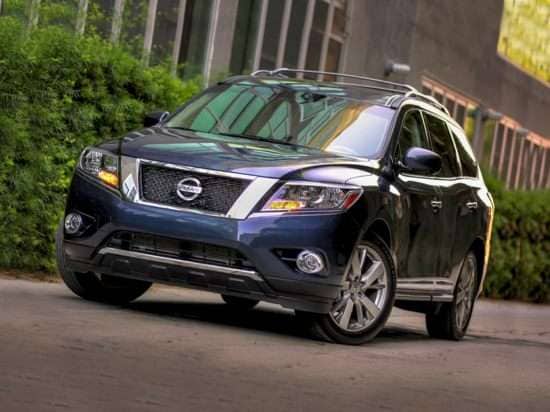 Changes for the 2014 Nissan Pathfinder:

Aside from the debut of a new Tech Package for the Pathfinder SL, the big news for 2014 is the introduction of a Pathfinder Hybrid model that improves combined fuel economy by 4 mpg while extracting an additional $3,000 from your wallet.

A 3.5-liter V-6 engine generating 260 horsepower and 240 lb.-ft. of torque is installed in every Pathfinder model. It delivers power to the front wheels through a continuously variable transmission (CVT), and can be paired with Nissan’s Intuitive All-Mode 4-wheel-drive system as an option.

A new gas-electric hybrid powertrain is installed in the 2014 Pathfinder Hybrid. Combining a supercharged 2.5-liter 4-cylinder engine with an electric assist motor and a lithium-ion battery, the Pathfinder Hybrid makes 250 horsepower and 243 lb.-ft. of torque, roughly equivalent to the standard V-6 engine. A CVT powers the front wheels, and Intuitive All-Mode 4WD is optional.

The EPA hasn’t published final fuel economy estimates for the Pathfinder Hybrid as this summary is written, but Nissan says it will get 25 mpg in the city, 27 mpg on the highway, and 26 mpg in combined driving. Compare that to the standard Pathfinder at 20-mpg city/26-mpg highway and 22 mpg in combined driving. Adding the 4WD system drops these numbers by 1 mpg each.

Crash-test data for the 2014 Pathfinder is unavailable as this summary is written. Last year, the Insurance Institute for Highway Safety (IIHS) gave the Pathfinder the top rating of “Good” in the moderate offset frontal-impact and side-impact tests. In 2013, the SUV was not assessed for roof crush strength protection or for rear-impact injury prevention.

Is it just us, or is it strange that Nissan doesn’t offer its safety technology suite of Blind Spot Monitoring, Lane Departure Warning, and Moving Object Detection for the 2014 Pathfinder? Maybe it’s coming later in the model year.

All models except for the Pathfinder S are equipped with a reversing camera and rear parking sensors, and Nissan installs its unique, and useful, Easy Fill Tire Alert system in the Pathfinder, making it harder for owners to find a valid excuse for rolling around on underinflated tires.