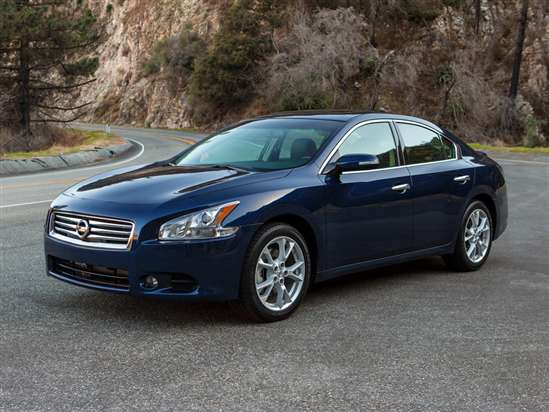 Changes for the 2014 Nissan Maxima:

The 2014 Maxima is a 4-door sedan offered in S and SV trim levels, the latter including leather seats, expanded adjustment for the driver’s seat, a color monitor with a reversing camera, an upgraded audio system with satellite radio, and a universal garage door opener. Exterior upgrades for the Maxima SV include standard Xenon headlights, fog lights, LED turn signal indicators for the side mirrors, and more. Choosing the Maxima SV is the ticket to most of this model’s optional features.

A 3.5-liter V-6 engine is standard for the 2014 Maxima, making 290 horsepower that is fed to the front wheels through a continuously variable transmission (CVT). All Maximas include a Drive Sport mode and provide a manual shift gate. Paddle shifters are optional as a part of the available Sport Package for the Maxima SV.

According to the EPA, the 2014 Maxima is rated to get 22 mpg in combined driving while burning premium fuel.

The Maxima’s crash-test performance is unimpressive, according to the National Highway Traffic Safety Administration (NHTSA). The car gets a 4-star overall rating, but take a closer look at the frontal-impact scores, which reveal a dismal 2-star rating for whomever is sitting in the front passenger’s seat. The driver is also at risk, as evidenced by a 3-star side-impact crash-test rating.

Ratings from the Insurance Institute for Highway Safety (IIHS) are more favorable. The Maxima gets “Good” or “Acceptable” ratings in all tests except for the rear-impact injury prevention measure, for which the car rates “Marginal.” Note that the Maxima managed an “Acceptable” rating in the tough new small overlap frontal-impact test, notable given the car’s age.

Any tech-related features of note are offered only for the Maxima SV. A reversing camera and a USB port are standard for this model, while options include a premium audio system, a navigation system, Bluetooth streaming audio capability, and live traffic and weather reports.