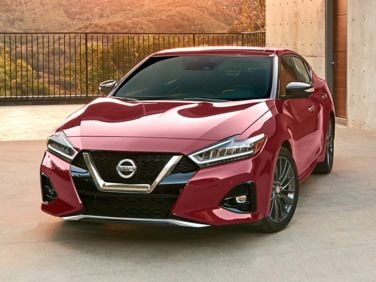 All About Nissan Maxima

The Nissan Maxima is a four-door, five passenger mid-size sedan. The Nissan Maxima is one of the Japanese automaker’s longest running nameplates, having been in continuous production since 1976. Since going on sale in the early 80’s in North America, the Maxima has managed to carve out a fairly successful niche for itself, slotting in as Nissan’s large mid-size sedan. A history of combining sporty handling and power with attractive styling has made the Maxima one of Nissan’s best sellers.

The Nissan Maxima has been completely re-designed in comparison to the 2008 model. Whereas before the Maxima had employed subdued angles and a general rounded shape, the new version of the vehicle has clearly joined the same club as the recent Lexus sedans. The sharp, aggressive angles of the front end lead to a grille perched at the end of a long hood that is suggestive of the Nissan GT-R. The vehicle looks much more modern in its new guise.

Improvements were made under the hood as well, with the 3.5 liter V6 engine being tweaked to produce 290 horsepower and 261 ft-lbs of torque, which gives the car a slight edge when it comes to other Japanese sedans. Shifting duties have been assigned to a continuously variable transmission which can be paddle shifted through ‘virtual gears’ should drivers wish to engage in some sporty acceleration. Both Maxima trim levels make use of this same drive train, which turns in fuel economy numbers of 19 miles per gallon in the city and 26 on the highway.

There are two different versions of the Maxima, the S and the SV. The S is nicely equipped, with a moon roof, keyless entry, dual climate controls and stability and traction control. The SV is aimed at the more luxury-conscious buyer, upgrading seating materials to leather, and adding fog lights to the front end and LED turn signals to the side mirrors. Two different options packages are available for the SV – a Sport package which upsizes the sedan’s wheels to 19-inches and installs HID headlights and a tighter suspension, and a Premium package, which outfits the car with mood lighting, rear-seat air conditioning and a wood trim interior.

Nissan has done their best to give the Maxima the sort of pleasurable driving experience that sports sedan buyers are looking for, and they have largely succeeded. While some drivers will be upset by the fact that a CVT is the only transmission option, the unit is actually quite responsive, even when in non-sport mode. The chassis has been updated significantly in order to reduce flex and lighten the vehicle, and the Maxima shares its speed-sensitive power steering with the 350Z sport coupe. The front-wheel drive Maxima’s handling, while very good, is not on par with the rear-wheel drive European sports sedans which dominate the luxury sport market. However, Nissan is hoping to steal sales away from Toyota and Honda with the Maxima, rather than Acura and BMW.

The Nissan Maxima is a very capable family sedan which can also double as a fun drive for anyone tired of the sameness which can sometimes overwhelm Japanese mid-size sedans.

The Nissan Maxima has been redesigned since the 2008 model year, resulting in a very different car that is more powerful and that has more comfort features inside. The Maxima has been given a wheelbase that is shorter and a track that is wider. The car also weighs less than the 2008 models, boosting its performance and cornering capability. The engine has been given a power upgrade of an extra 35 horsepower, bringing it to 290. The transmission has been reprogrammed and there are now paddle shifters available as options.

The Maxima has a navigation system based in a hard drive that is standard this year as well as a rearview camera, a ventilated driver’s seat, an iPod integration system that is user friendly and traffic updates in real time.

The exterior has been redesigned with newly-designed headlights in the shape of shark fins and LED taillights. The rigidity of the body has been increased and some of the dimensions have changed. The rigidity of the body is now 15 percent higher and the rigidity of the front strut mounting is now 100 percent higher. The engine compartment has new structures and extra reinforcement that has been applied to the structure of the instrument panel. For Maximas that have the Premium or Sport options packages, have an extra 17 percent torsional rigidity because of an extra panel that is located behind the back seat. Models that have a fold-down seat in the rear do not have this extra torsional rigidity.