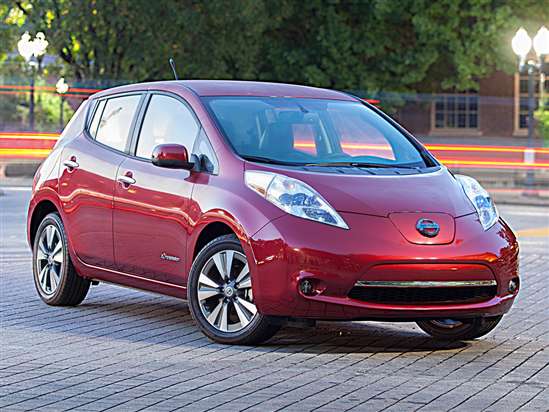 Nissan adds a reversing camera as standard equipment for all 2014 Leaf models, and Gun Metallic is a new paint color.

The 2014 Leaf is an electric car equipped with a Lithium-ion battery, an 80 kW electric motor, and front-wheel drive. It makes 107 horsepower and 187 lb.-ft. of torque, and is rated to travel 84 miles between visits to the electrical outlet.

Install the available quick-charge port and use a DC Fast Charger like those offered by municipalities, and the 2014 Leaf’s battery achieves an 80-percent charge in just 30 minutes. Equip your home with the optional 240-volt charger and it takes less than five hours with the 6.6 kW onboard charger or less than eight hours using the car’s standard 3.3 kW charger. Plug the Leaf into a standard 110-volt household outlet and it takes 21 hours to fully recharge the battery. A battery heater is standard for the Leaf, useful in colder climates.

Nissan provides an 8-year/100,000-mile warranty for the Leaf’s battery. If the maximum battery capacity falls below 75% of original maximum charge at any time during the first five years or 60,000 miles of ownership, Nissan will replace the battery at no charge.

In combined driving, the 2014 Leaf is rated to return 114 MPGe. Range is dependent on driving style, driving conditions, terrain, and other factors.

The Insurance Institute for Highway Safety (IIHS) has a more favorable view of the Leaf’s crashworthiness, giving the electric car its highest rating of “Good” in all assessments except the small overlap frontal-impact test, for which the Leaf had not been tested as this summary was written.

In addition to its electric drivetrain, the 2014 Leaf is equipped with standard Bluetooth connectivity, a reversing camera, and a system that makes a sound at low speeds to warn pedestrians and cyclists that an electric car is operating nearby.

The Leaf SV and SL are equipped with a navigation system that includes CarWings telematics that helps the driver to understand how far the car can travel on remaining battery charge, can help to find public charging stations when necessary, and provides a remote connection to the Leaf to check charge status and activate the climate control system. An Around View monitoring system is available for the SV and SL models.