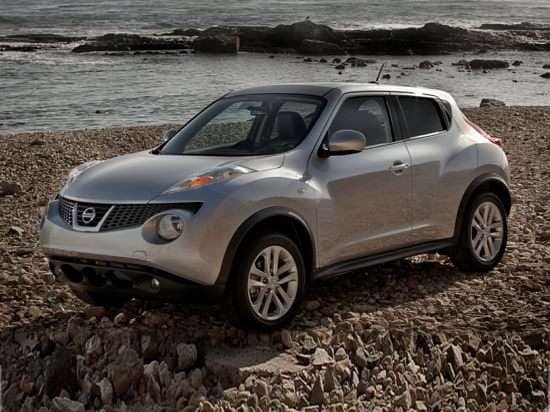 New colors called Red Alert and Bordeaux Black debut for the 2014 Juke, and a new NISMO RS performance model is added to the lineup. The NISMO RS is more powerful than the NISMO model and is equipped with a helical limited-slip differential, upgraded handling, and structural reinforcements. Inside, this new performance-tuned version of the funky Juke gets Recaro performance seats wrapped in Alcantara suede and leather, as well as carbon-style interior trim.

Five versions of the 2014 Nissan Juke are on sale. The S, SV, and SL models are the mainstream choices, while driving enthusiasts and extroverts will want the NISMO or NISMO RS models.

A turbocharged, 1.6-liter 4-cylinder engine is standard for the S, SV, and SL models. It makes 188 horsepower and 177 lb.-ft. of torque, delivered to the front wheels through a 6-speed manual gearbox. A continuously variable transmission (CVT) with a Sport mode is optional for the Juke S and SV, and standard for the Juke SL. All-wheel-drive with torque vectoring technology is available for all three models.

Enthusiasts will want to consider the Juke NISMO or NISMO RS models. Each is equipped with a performance suspension, revised styling, and 18-inch aluminum wheels wrapped in more aggressive rubber. The NISMO model is massaged to generate 197 horsepower and 184 lb.-ft. of torque, while the NISMO RS makes up to 215 horsepower and 210 lb.-ft. of torque when equipped with a manual transmission. The NISMO RS also benefits from upsized brakes, a strengthened structure, revised exhaust tuning, massaged steering and, in versions equipped with the standard manual gearbox, a helical limited-slip differential.

Select a NISMO RS with a CVT, and you’ll get 211 horsepower and 184 lb.-ft. of torque. This version of the vehicle also comes with paddle shifters with eight driver-selected “gears.” Torque-vectoring AWD is optional for both NISMO models.

The EPA does not distinguish between the standard Juke lineup and the Juke NISMO models when it comes to fuel economy ratings. Get one with a manual gearbox and front-wheel drive, and the combined rating is 27 mpg. Choose the CVT, and that number rises to 29 mpg. Get AWD (which includes a CVT), and the EPA thinks the Juke will return 27 mpg.

In crash tests conducted by the National Highway Traffic Safety Administration (NHTSA), the 2014 Juke receives an overall rating of 4 stars, thanks in part to a 3-star frontal-impact protection rating. According to the Insurance Institute for Highway Safety (IIHS), the Juke gets a “Good” rating in all assessments except for the small overlap frontal-impact test, for which it had not been rated as this model summary was written.

A Navigation Package is offered for most Juke models, including a 5-inch touchscreen display, a premium audio system, a USB port, and a reversing camera. Midnight Edition and Sport option packages are also available, installing cosmetic upgrades for non-NISMO Juke models.