For years, those of us in the automotive enthusiast community who enjoy torturing ourselves with fantasies about cars the rest of the world gets but we can’t have lusted after the forerunner to the Nissan GT-R—Nissan’s Skyline GT-R. Tales of the car’s capabilities were legend. Otherworldly acceleration, awe-inspiring braking, freakishly resolute cornering, and a price tag more in line with cars not even half as potent.

The Skyline GT-R was the very definition of unobtanium.

Then, in 2009, we saw our wildest dreams come true. Nissan brought the GT-R to the United States with 473 horsepower and 434 ft-lbs of torque from a twin-turbocharged version of what many people who know these things considered to be the best V6 engine in the world. And yes, it was everything we’d dreamed it would be—and more.

It’s more than fair to say nothing else looks like the Nissan GT-R. The closest any car comes is the Infiniti Q60 coupe, and frankly it makes the GT-R look pretty much like a flying brick. The squared-off styling, blunt edges, rear sloping roof line, long hood and almost non-existent rear deck of the GT-R is a highly polarizing amalgamation of lines and surfaces.

If you like it, you really love it. If you don’t—then…

Basically, nobody’s in between on the look of the GT-R.

It does get admiring glances, and more than few compliments from passersby when it’s parked on the street. However, this display of affection generally stems from the car’s reputation. People who know what it is, say “nice car” more because they have an idea what it's capable of than because they think it's good looking.

Now, having made that statement, we will say every aspect of the styling of the Nissan does influence its performance—and in a positive way. The NACA intake ducts on the hood help cool the engine compartment; the overall shape of the car produces downforce for improved traction. The gaping openings at the front of the car feed the many and varied oxygen-demanding ravenous hungers of the GT-R. The chrome-adorned vents on the sides of the GT-R allow superheated air to escape from the engine compartment.

If we were to sum up the design of the Nissan GT-R in one word, it’d be “purposeful”.

Seated at the steering wheel, the confluence of dials, buttons, screens, and gauges give the impression of one very serious automobile. It’s all very elemental, and while it looks busy and complicated at first, you acclimate to it rather quickly.

The wheel also houses controls for the audio system, cruise control, and communications system. The speedometer is canted so the needle actually points to the right when the car is at rest. Calibrated for a maximum of 220 miles per hour, it really only becomes useful once the car is well above 100 miles per hour. Fortunately a small programmable screen in the tachometer can be set to display road speed—in addition to fuel economy, distance to empty, and other diagnostic information.

The tour de force, and the star of every GT-R’s cockpit since the model was introduced is the seven-inch touchscreen at the top of the center stack. The multi-function display was developed in collaboration with Polyphony Digital, makers of the Gran Turismo electronic game. Fourteen different pages of information are available on this system, including mechanical and driving information, acceleration, brake pedal pressure, steering angle and a recording function with playback so you can see the statistics generated by your antics at the wheel. Plus you can custom configure screens to display any combination of the available readouts. It’s really quite informative—not that you’ll have time to look at it while the car is being used in a manner capable of generating the big numbers.

While it is probably something of a secondary concern in a car of this nature, the Bose audio system fitted to the GT-R is one of the best we’ve ever heard. The system exhibits outstanding clarity, deep—but well-defined bass response, and more than enough power to deliver clean sound even at significantly elevated volume levels.

The three position toggle switches for adjusting the suspension system, transmission response, and traction control can be a bit confusing at first. You have to hold them in position for a moment to get them to engage. At first glance, it looks as if there are only two settings, but there are actually three for each switch. The GT-R defaults to the middle setting for each parameter whenever you restart the engine.

The Recaros in our GT-R Black Edition test car were everything you’d expect a set of Recaros to be. The driver’s seat offers additional bolstering, and both are heated. With all-day comfort, the seats are firmly supportive, do a wonderful job of containing you when the car is in the midst of its most extreme cornering capabilities, and look good too.

Legroom, headroom, and shoulder room are outstanding—as long as you’re seated in one of the two Recaros. The back seat is best thought of as a leather-upholstered area for your jacket, backpack, briefcase, or whatever other personal items you may have chosen to bring on board. Perhaps in jest, Nissan’s interior design team placed two cupholders back there. There are two more in the center console under a sliding cover. The center armrest is back a bit too far to be completely useful, but it also hides a velvet lined storage compartment.

The storage nets in the front doors are perfect for containing smaller water bottles. This is preferred, because if you use the cupholders in the center console you’ll find the bottles get in your way.

Trunk space is quoted at 8.8 cubic feet, and while it sounds meager, when you see the depth of the cargo compartment you’ll be impressed.

The GT-R’s engine and rear mounted dual-clutch automated manual transaxle are hand assembled in a clean room operation. The twin-turbocharged 3.8-liter V6 in our Black Edition test car makes 545 horsepower and 463 ft-lbs of torque. An advanced all-wheel drive system completes the powertrain. The engine uses plasma sprayed bores to significantly reduce friction and weight. It also has both a wet and dry-sump oiling system.

The transmission, transfer case, and final drive are positioned at the rear to optimize weight distribution. Also improving balance; the engine is mounted so the bulk of its mass is behind the front wheels, giving the GT-R a mid-engine layout. The all-wheel drive setup is biased toward the rear in steady state operation, but can transmit up to 50 percent of driving force to the front when circumstances dictate.

Reputed to be the quickest car in the world, with its launch control function engaged the 2015 Nissan GT-R accelerates from zero to 60 in 2.9 seconds. (And yes, we saw it do so—repatedly.) If you’ve ever wondered how a baseball might feel when flung by Nolan Ryan, we're betting this has to be pretty darn close. You’re shoved deeply into the Recaros as the car rockets forward. When you recover from the initial disorientation and glance at the speedometer, you’ll see you’re well past the ticket-able range on every highway in every state in the union.

It’s OK though, because the brakes haul you back to zero with nearly the same alacrity. If it’s a highly visceral experience you long for in your choice of motorcar, here’s the one you want. Further, the Nissan GT-R’s prowess extends far beyond acceleration and braking. The car corners as if the hand of the Almighty presses it to the pavement and refuses to let you slide, seemingly no matter how rapidly you enter a corner.

Yes, the GT-R is that easy to drive fast—pretty much anyone can do it.

Now, with that said, it’s even more rewarding for a driver with skills. Interestingly, while you know there are all sorts of computer-assisted wizardries going on behind the scenes, the feeling is singularly unadulterated. The power comes on in a relentless stream, giving the impression of never ending acceleration. In the mid-range, one tickle of your big toe is all it takes to send the GT-R instantly whooshing from 60 to 100 miles per hour with so much elasticity you’ll do it again and again just for the sensation.

The steering provides outstanding feel for an all-wheel driven car, and indeed the entire chassis speaks to you through the driver’s seat. You know exactly what’s going on at all four wheels in every moment. And, while Bose has just devised a new noise cancelling system for the GT-R, you still hear every aspect of its functioning— intake, exhaust, turbos spooling, relief valves exhaling, the transmission’s gear changes—it’s all there.

Long story short, this is one of the most satisfying driver’s cars on offer today.

We thought the GT-R was brilliant the first time we drove it back in 2009, but now it’s even better than ever. Nissan’s engineering team has had the GT-R on a steady diet of improvements ever since it was launched. Yes, it’s a bit on the noisy side, and the transmission does feel kinda clunky in the automatic mode at lower speeds—but when you consider what the Nissan will do, it becomes pretty easy to overlook those faults.

Further, its performance potential is easily accessible. Handling is utterly predictable and thoroughly enjoyable as a result. Acceleration is miraculous, braking even more so, and best of all, one could easily live with the GT-R as a daily driver.

No, it isn’t as sophisticated as a BMW M5 (which has similar power output and a similar price), but the GT-R is an entirely different animal. 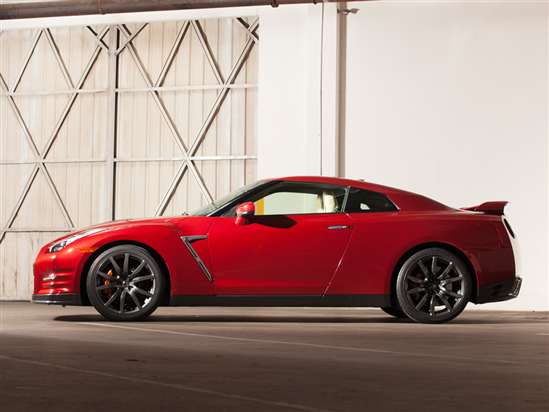