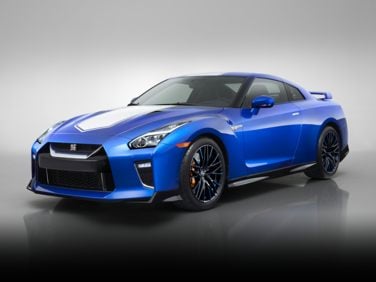 All About Nissan GT-R

The Nissan GT-R is a two-door, four passenger sport coupe. Nissan had been producing ultra-powerful sport coupes for the domestic Japanese market for many years before the decision was made to import them to North America. In particular, the Nissan Skyline coupe had become the poster child for American Nissan fans, due to its sleek shape, its turbocharged engines and all-wheel drive performance. The success of the Mitsubishi Lancer Evolution in the United States, another Japanese race car which had previously been restricted to Japan helped to convince Nissan that they would be able to sell enough examples of this type of vehicle to justify the costs of export.

The Nissan GT-R is a stunning tour de force in terms of performance, style and power. Based on the GT-R concept car which made the rounds of automobile shows worldwide in the mid-2000’s, the GT-R is poised as one of the genre-defining achievements in the high-powered sports car class. At the heart of the GT-R is a hand-assembled, 3.8 liter twin-turbo V6 engine which makes 480 horsepower and 430 lb-ft of torque. The all-wheel drive system on this vehicle is designed to be biased so that 100 percent of the power can be sent to the rear wheels, with a split of 50 / 50 front and back possible should conditions or driving style dictate. The GT-R is shifted through a 6-speed dual clutch automatic transmission, which can be controlled through paddle shifters mounted on the steering wheel.

With a top speed of 195 miles per hour, the Nissan GT-R is no ordinary sport coupe. Add in acceleration from zero to 60 miles per hour in 3.2 seconds and a quarter mile that flashes by in the mid-11’s, and its clear that things can get very interesting, very fast in this sports car. The GT-R uses several different technological innovations to help drivers keep the blazing acceleration and handling ability under control. The Vehicle Dynamic Control system has three settings: Normal, R-mode and Off. In the first setting, electronic nannies keep a fairly close eye on the driver, while R-Mode increases the boundaries at which the system will intervene. Turning the system off allows the driver to tackle the GT-R’s capabilities with only their raw talent to guide them. The transmission also has three settings, Normal (designed for smooth, daily driving), Snow (reduces the amount of torque available from a standing start) and R-mode (increases the speed of shifts to their fastest possible level). 15-inch brakes both front and rear which use two-piece floating rotors do their best to slow down this somewhat heavy supercar, and a Bilstein electronically controlled suspension system lets owners decide just how edgy they want things to get.

The Nissan GT-R is positioned to compete not only against other powerful, full-size coupes such as the BMW M6, but also against many of the world’s top sports cars like the Porsche 911, Corvette Z06 and Dodge Viper. Priced competitively to undercut the 911 Turbo but slightly more expensive than a Corvette, the GT-R is a unique option for buyers looking for something completely different than anything else on the market.

The Nissan GT-R has had a few changes since the last model year, including cosmetic changes as well as several changes under the hood. The GT-R has gotten more powerful in 2009 with a 5ps upgrade to 485ps. The fuel economy rating is slightly better this year at 21 miles per gallon on the highway and 16 miles per gallon in the city.

There is a new white paint color for the exterior of the GT-R called Storm White. The brake calipers are still made by Brembo, but they have been renamed Nissan brakes this year. The base of the license plate on the front is no longer a part of the design. The fuel tank is also slightly larger than in past years. The Vehicle Dynamics Control system, has been changed to increase the performance of the car while it is in use. In past years. Turning off the system was known as “launch control” and was known to boost the performance of the car.

The newer design will make the performance of the car better with the system turned on and eliminate the benefits that were gained by turning off the system. Nissan recommends that the 2009 GT-R Vehicle Dynamics Control system not be turned off unless the vehicle is stuck and needs a quick RPM boost to get it free from the obstruction.

There are two available trim levels this model year- the base model and the Premium. The base GT-R comes with xenon headlights, leather upholstery, 20-inch wheels made from alloy, power seats in front, Bluetooth, XM Satellite Radio, a Compact Flash card reader in the dash, six speakers, and a navigation system standard. The Premium trim comes with 11 speakers as part of a Bose sound system, side airbags for the front passenger, a tire upgrade and heated front seats.