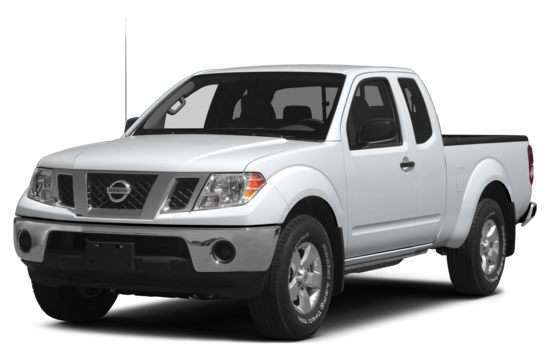 Changes for the 2015 Nissan Frontier:

The aging, decade-old Frontier compact pickup truck sees few changes for 2015. Nissan adds its NissanConnect with Mobile Apps technology as standard equipment for the SV and Desert Runner models, while the PRO-4X now includes a standard navigation system and the SL gains a standard power sunroof.

Nissan sells the Frontier in extended cab and crew cab styles with a choice between 2-wheel drive and 4-wheel drive, and either a 4-cylinder or a V-6 engine. Trim levels are named S, SV, SV V6, Desert Runner, PRO-4X, and SL.

The S, SV, and SL models gain progressive amounts of standard equipment. Desert Runner models have 2-wheel drive combined with a 4-wheel-drive appearance, while the PRO-4X is equipped with serious off-roading hardware.

For maximum towing and payload capability, you want that one anyway. When properly configured, the Frontier can handle 1,524 pounds of payload and 6,500 lbs. of trailer.

In combined driving, a Frontier with a 4-cylinder engine gets between 19 mpg and 21 mpg, the automatic transmission burning more gas. Similarly, the V-6 is more fuel-efficient with a manual transmission. The Frontier 2WD is rated to get 19 mpg with the stick and 18 mpg with the automatic. Add 4WD, and each number drops a single digit.

According to the Insurance Institute for Highway Safety (IIHS), the Nissan Frontier gets decent crash-test scores for such an old truck, notching a top “Good” rating for the moderate frontal-impact, side-impact, and roof crush strength tests. Additionally, the truck earns an “Acceptable” rating for how well its front seats and restraints protect against whiplash. The IIHS has not conducted a small overlap frontal-impact test on the Frontier.

The NHTSA hasn’t recently tested the Frontier at all, giving the truck ratings only for its ability to resist rolling over in a lateral skid. The 4WD model gets a 4-star rating in this regard, while the 2WD model receives a 3-star rating.

From a technological standpoint, the most impressive thing about the Frontier is its NissanConnect with Mobile Apps infotainment system. It includes access to Pandora and iHeartRadio Internet radio, as well as both Twitter and Facebook social media platforms. A hands-free text-messaging assistant is also included, along with a reversing camera. The system can be upgraded with a navigation system that includes SiriusXM traffic reports.