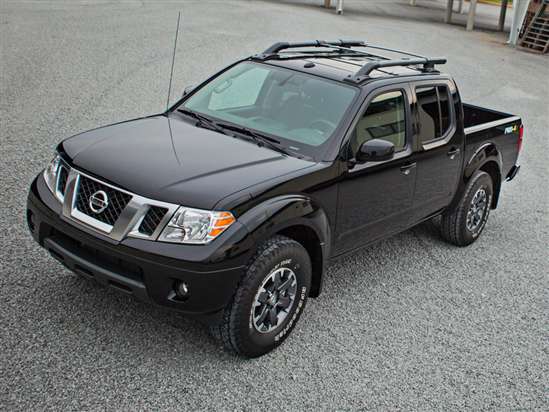 Changes for the 2014 Nissan Frontier:

Most Frontiers add standard equipment for 2014, and new aluminum wheel designs debut. All Frontier S models with an automatic transmission get Bluetooth connectivity, air conditioning, an upgraded audio system, and cruise control. Most Frontier Crew Cab models have a sliding rear window for 2014, while heated front seats are added for the PRO-4X model and as part of the SV Value Truck Package. The optional NissanConnect technology is upgraded this year.

Nissan sells the 2014 Frontier in King Cab and Crew Cab styles, with a standard or long cargo box, equipped with a 4-cylinder or a V-6 engine, 2-wheel or 4-wheel drive, and a manual or automatic transmission. Trim levels include S, SV, Desert Runner, PRO-4X, and SL models. The Frontier S is the basic work truck, the Frontier SV is the popular model, and the Frontier SL is the luxury-themed version. Desert Runners have 2WD, while PRO-4X models are off-road ready.

The Frontier King Cab model comes standard with a 2.5-liter 4-cylinder engine that makes 152 horsepower and 171 lb.-ft. of torque. A 5-speed manual gearbox is standard, with a 5-speed automatic transmission optional.

The King Cab can be optioned with a 4.0-liter V-6 engine generating 261 horsepower and 281 lb.-ft. of torque. It comes standard with a 6-speed manual transmission, with a 5-speed automatic available as an option. Desert Runner variants include the automatic transmission as standard equipment.

In crash tests performed by the Insurance Institute for Highway Safety (IIHS), the Frontier receives the highest rating of “Good” for the moderate overlap frontal-impact, side-impact, and roof crush strength assessments. In terms of rear-impact injury prevention, the Frontier rates “Acceptable.” The truck has not been tested in the new small overlap frontal-impact test as this summary is written.

A reversing camera and rear parking assist sensors are available for the 2014 Frontier, along with NissanConnect technology. For 2014, Frontier owners can pair a smartphone to the vehicle’s infotainment system, and through voice commands or the 4.3-inch touchscreen display in the dashboard they can stream music, make and receive calls, access social media platforms, use a hands-free text-messaging assistant, and more.